The prize is funded through an endowment and estate gift from Miss Mary Stedman. A great supporter of the university, Stedman passed away in 2014. She entrusted the university with the task of determining how to best use the funds.
Notes
Wilfrid Laurier University is a public university in Waterloo, Ontario. Laurier traces its roots to 1911 with the founding of the Evangelical Lutheran Seminary of Canada, the first Lutheran seminary in Canada. 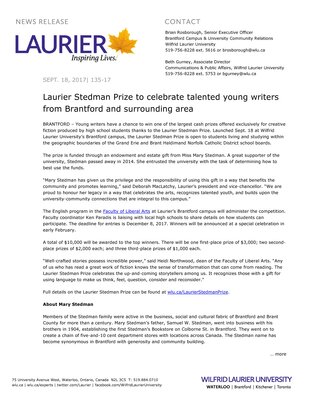