Brantford residents Steven and Helen Kun announced that they are doubling their commitment to the Laurier Brantford YMCA with an additional $1-million gift. This donation brings the family’s total contribution to the project to $2 million. The YMCA and the university, along with numerous community representatives, recognized the Kuns’ generous contribution today in a special celebration that also marked the completion of the Laurier Brantford YMCA fundraising campaign.
Notes
Wilfrid Laurier University is a public university in Waterloo, Ontario. Laurier traces its roots to 1911 with the founding of the Evangelical Lutheran Seminary of Canada, the first Lutheran seminary in Canada. 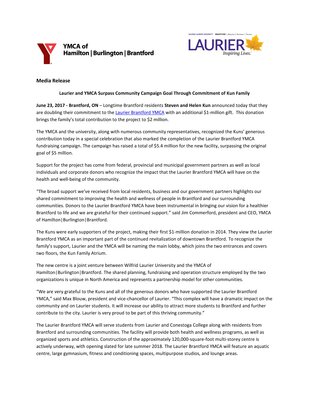