The symposium, entitled “From Exception to Rule: Advancing the Role of Women Innovators and Entrepreneurs in Regional Innovation Ecosystems,” is being organized by WEiRED (Women Entrepreneurs, Innovators, and Regional Ecosystem Development), a research group led by Josephine McMurray, an assistant professor in Business Technology Management at the Lazaridis School of Business & Economics on Laurier’s Brantford campus. The goal of the project is to understand how women entrepreneurs impact and are impacted by regional innovation ecosystems.
Notes
Wilfrid Laurier University is a public university in Waterloo, Ontario. Laurier traces its roots to 1911 with the founding of the Evangelical Lutheran Seminary of Canada, the first Lutheran seminary in Canada. 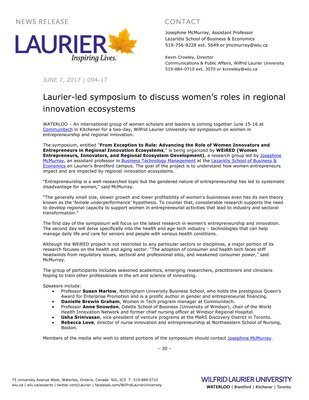