The committee – established by the university administration and the Wilfrid Laurier University Faculty Association (WLUFA) – recommended that salaries of female faculty at the rank of associate professor be increased by 3.0 per cent and that female faculty at the rank of full professor be increased by 3.9 per cent to address a gender wage gap.
Notes
Wilfrid Laurier University is a public university in Waterloo, Ontario. Laurier traces its roots to 1911 with the founding of the Evangelical Lutheran Seminary of Canada, the first Lutheran seminary in Canada. 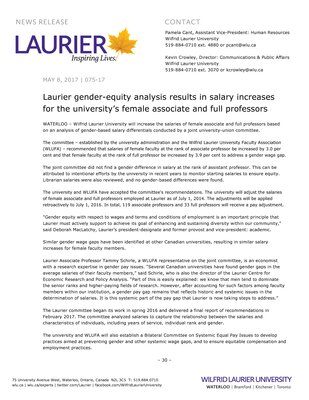