Creator
Wilfrid Laurier University, Author
Media Type
Text
Item Type
Documents
Description
Wilfrid Laurier University news release announcing the Tshepo Institute for the Study of Contemporary Africa will host a full-day graduate student conference on Friday at the Balsillie School of International Affairs. The multidisciplinary conference will feature presentations by graduate students from Laurier, the University of Waterloo, and the University of Guelph.

Includes information about the event and the Tshepo Institute for the Study of Contemporary Africa.
Notes
Wilfrid Laurier University is a public university in Waterloo, Ontario. Laurier traces its roots to 1911 with the founding of the Evangelical Lutheran Seminary of Canada, the first Lutheran seminary in Canada. 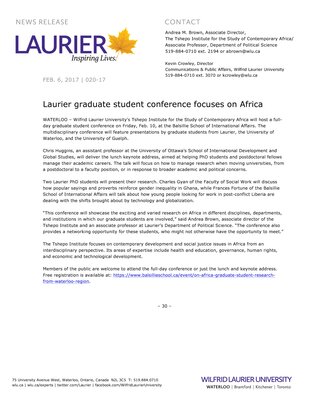