Your most welcome and newsy letter was received to-day and was greatly enjoyed. As I am not very busy to-night and am preaching only to-morrow evening at Hespeler, I thought I had better seize the opportunity and write you to-night. I suppose in the meantime you have received my letter written from Maynooth, though it no doubt reached you several days late. Maynooth, however, is better situated than some of the other towns or villages we visited as it is the head or terminal of a railway leading to Toronto. At Pembroke we were the farthest north and at Denbigh the farthest from a railway – about 60 miles. I preached at Maynooth last Sunday morning. The afternoon service was announced to be entirely German; but when we got to the Church the Vorsteher (Members of the Council) approached Pastor Jannau and requested that there be an English sermon, as many people had come from a long distance, 25 or 30 miles, who did not understand German. As neither of the other pastors was prepared to preach an English sermon the duty fell upon me and I discharged it to the best of my ability. There were a few odd features about the service there. One was that just before the collection was taken quite a number of the people got up and walked out of the Church – a habit which I understand they have up there. I am thinking of adopting this custom tomorrow as my cheque for August hasn’t come yet, and I have just about enough

for the children’s collection in Sunday School in the morning. The other was that after each table of the communion each communicant walked over and placed a special offering in the plate held by one of the officers at the left of the altar. This is an old custom, but I had never seen it before. It had the appearance of paying for the communion, or at least gave me that impression. The Church was well filled at both services, each of which lasted two hours. At the morning service it was crowded to the doors. The people were mountaineers and looked the part; but they were very attentive hearers. We stayed at Maynooth till Tuesday morning and went trout fishing on Monday in Papineau Creek. It was a typical trout stream with its clear water, cascades and falls and banks of woods and brush and rocks rendering it all but inaccessible. But we were very successful and took 41 trout that day, of which I caught 8. From various causes I lost about as many as I caught. But we had three good meals of trout. The mountains in that section are not high as compared with the N.C. mountains, but range around 2000 ft. above sea-level. The air, however, is much cooler and much more invigorating than in the southern mountains; and the whole country is picturesque and wild. There was a heavy white frost on the ground on the morning of Aug. 30, which no doubt played havoc with the gardens. We left Maynooth early Tuesday morning, hoping to reach Toronto sometime that night. But our old Ford began to give further evidence of decrepity as we travelled up and down the hills on the road of a thousand curves. The difficulty this time was not in going, but in stopping. Our driver Pastor Pfeiffer, who knows about as much about running a car as I do about running a sawmill, wore all his brake-bands out. The emergency also wouldn’t work.

The only way he could control the car at all was with the reverse and that was so weak that it wouldn’t move the car backward on level ground. He also invariably turned the car too short around the curves. As long as he got the forewheels around he didn’t give a tinker’s dam as to what became of the hind wheels. As a consequence he often struck the bank with the hind wheels and once hit a rock that knocked the driving wheel out of his hands and caused the car to leave the road and start for the ditch. However, providence was with us and we got down to the comparatively level country with souls still in our bodies and hides whole. We made about 60 miles when the car had to go into a garage for about 4 hours, We spent the time fishing in the brook nearby and caught innumerable chubs, cat fish, yellow perch and sun perch just for the fun of fishing. We got only down to the neighborhood of Tweed about 10 miles further on before night. Wednesday we started early for home, and as the car had been repaired from A to Izzard since we had started and as we had fairly level and straight roads, nearly all paved, we had no further drawbacks except a broken spring, an a near collision in Toronto due to stupid driving, and reached home about 8 o’clock on Wednesday evening. Here I had a great reception. Little Catharine was so glad to see her “dearie Father” that she kissed me from my boots to my head and followed me around wherever I went. When I went into the bath room to cleanup she came in and said, “Father, you don’t want to be in here alone, I will come in and keep you company.” Bonnie and the rest of them too were glad to see me again, as I had been away two full weeks. I found it quite cold

at times; and was threatened with a little bronchial trouble; but at Arnprior I went to a Doctor and got a prescription for a quart and that fixed me up OK. I had no more trouble after that and have since passed on the remedy to Bikle for such attacks. It is rather to be deplored that Marion and I missed the melons and the grapes, but there was that much more left for the rest of you; and besides we have been living sufficiently high on corn and cucumbers and beans and apples and onions, etc that anything additional would be a superfluity, and in the mountains I had raspberries and blueberries galore. I am due to attend the Eastern Conference at Morrisburg on the 14th and 18th. As our Dominion Election comes on the 14th I have notified the authorities that this would not be a suitable day for holding the Conference and suggested to them that they hold it on the 15th and 16th instead. They will probably act on the suggestion. This brings it perilously near Bonnie’s confinement, which should be about the 19th if it occurs in Sept. If it doesn’t occur in Sept. I wouldn’t be at all surprised if it should be a doubleheader. I was quite interested in your account of Cousin Victor Coulter’s wedding. I though he was like Clarence a confirmed bachelor. The smaller children – Robert, Eileen, Ruth – started to school Sept. 1. The larger ones will start on the 7th – Marion to the Collegiate and the rest to the Waterloo College School. The College and the Seminary will open the 21st. Some of the students for the College school have already come in. Dr. Maurer is back from Nova Scotia, but I haven’t seen him yet. In talking to him over the phone he said he had the time of his life. I don’t think I myself ever passed a better or more ideal vacation, and I feel that I can now get down to work with a good conscience. Well I have written an awful long letter and will stop or you may think I reached the garrulous stage of senility. With love and all good wishes, I am 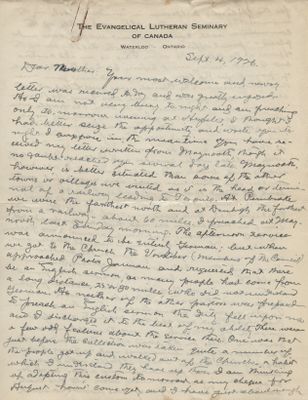