THE EVANGELICAL LUTHERAN SEMINARY OF CANADA

As my pen is not yet repaired I will have to click off my letter again to you tonight. There is one advantage about this however, and that is that I can type and smoke at the same time, which I can't do so well when writing with a pen. I did not receive a letter from you since I wrote you last week; but I received a nice long letter from Pearl and Bonnie received a ditto from Mabel (with the accent on h the el);so that wem had lots of news from home. Say to Pearl that I appreciated her letter very much and hope to give it due attention in th the future, i.e. some time to come. I will not have time to answer it to night. I don't believe that I have written to you since I came back frm Niagara Falls. I am enclosing for your edification a couple snaps that Carolus took down there and developed since returning home. It was a great trip and treat for the boys, and they enjoyed it immensely. I got through with my German service and sermon I thought fairly well and had a good attendance at both services. Financially it did not pay me very well, as they paid only $15 for the two services and I had to pay $10 for the car and driver and I spent just about $5 while down there; but I could hardly have made ascheap a trip taking all the boys down to Niagara in any other way. So I am quite satisfied with coming out even. We had concrete road all the way fro m Waterloo down and made it in three hours each way, not counting the delay of about half an hour at the border. On account of their having daylight saving time at Niagara we had to leave here at a very early hour, around 5 o'clock in the morning, which was as daylight saving always is an unmitigated nuisance But we made up for it by staying in bed late on Monday morning and every morning since. This morning I preached down at Brid geport. It was a fine day- too fine indeed to have a record attendance, yet I had a fairly goodsized and appreciative audience and got through with my sermon quite satisfactorily. I had a ride down with Prof. Henkel who had to pass that way to go to Breslau-Schantz- his parish. This afternoon I had my regular swim in the lake in the park, and tonight for a change I went down to St. John's and heard Pastor Roberts in English. He preached on Jonah and the whale. He was quite orthodox and said he believed the story though many people didn't, and pointed out that there were quite a lot of other things equally mysteriousthat we did not doubt, and he didn't see any reason why we should doubt this. He did not have his sermon very well organized and his English was no improvement over his German; but it is never so bad that it might not have been worse. Last Friday Arthur and I decided that we would swim all around the lake without stopping. We went down and tried it. Arthur made it in one hour. It took me exactly an hour and twenty minutes to accomplish the feat; but I went out of my course in swimming on my back and had to swim across the lake and back in addition, which partly accounts for my backwardness. But after swimming that length of time with out a stop I came out as fresh as when I started, which I think is quite a feat of endurance for a man of my age and station in life. Little Catharine had an attack of tonsilitis this week and was pretty sick for a few days, but I am happy to say that she is quite well again. We had the Dr. for her and he put her to bed and said she was to stay there for a week, but she got better in a day or so and we decided to let her up after three days. She would say "I am well now but I must stay in bed still and we didn't have the heart to punish the patient little creature by keeping her in bed any longer. Herman left on Monday by bike to visit

one of his classmates up the country about 30 miles. We haven't heard

from him since he left, but he no doubt got there all right. He will probably be back some time this week. Carolus did not do very well on his Provincial Examinations, only passing on half of them. Herman hasn't received his report yet; but I am sure he will do much better as he did not waste his time as Carolus did lest year and made much better grades I am starting off on Wed.of this week for my northern trip. I am to preach at Arnprior on the 22nd and at Mayneuth on the 29th and fish and swim in between times. I will not make anything on the trip, but it will give me a cheap vacation. I don't know how I will do about writing to you as I can't take my typewriter along and have no pen. So if you get a letter written with a leadpencil-which I abominate- or none at al don't be disappointed. Besides in those wild and woolly out of the way places they have mail only about once a week which runs by stage some 30 or 40 miles; and so in any case your letter is liable to be a week or a fortnight late. Therefore don't be discouraged and don't be alarmed if the postman fails to bring you a letter from me. I may be so taken up wi with catching fish in that great fishing country that I will have neither the time nor the disposition to write letters. You know it is quite an exciting proposition when the big black bass are biting well. If you don't believe it ask Walter or any other good sport. But I must really close fro this time. With love to all, I am

P.S. Marion is very much improved under the system of compulsory rest that we have imposed upon her. 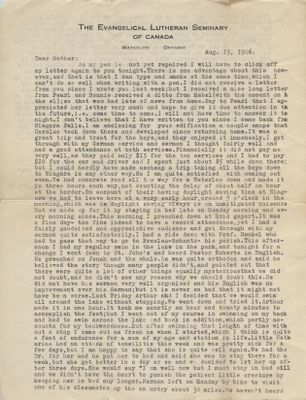