We are having a “little winter” here again after a period of some days of fairly mild spring weather. On Thursday afternoon it turned suddenly cold and snow began again to fall. The next morning we had four or five inches of it and the whole landscape was “a thing of beauty and a joy forever”, or words to that effect, and the temperature had dropped to 18% above zero. The ice, which was just on the point of leaving Silver Lake, solidified again; and I had to go down to the lower end of the lake to find a place to get in for my morning swim. This morning the situation was even worse and the temperature lower; and I had to go up the creek a considerable distance before I could find running water. But, just as “All things come to him who waits, I possessed my heart in patience, and was rewarded in finding a delightful pool, in which I had a very refreshing swim – the seventh of the season.

Yesterday the College – not the Seminary – had a holiday. All the professors scurried off to London – not England, but Ontario, Can. – to set up in connection with the University and the other affiliated Colleges the Final Examination papers for the scholastic year 1939-1940-leaving the students free from attending classes, which, it is needless to say, they did not regret. The College Dance is to take place on May 31st. In connection with it an amusing feature took place in the chapel right after service the other day. It seems that one of the students forged Dr. Clausen’s name to the advertising sheet of the dance; and he of course took exception to it and proceeded to bawl out properly the culprit who was guilty of such a thing, announcing that he had removed the paper from the bulletin board, and closing with the remark, “Anybody, boy or girl, who attempts to imitate my handwriting is very foolish”, at which robot everybody laughed, as he has a notoriously bad handwriting; and yet it was so cleverly done that

when I saw it, I took it for granted that he had signed it. The graduating class this year consists of seven – this being for the first time all girls, or “co-eds” as they are called. There was one boy in the class, but he seems to have failed to make the grade. Maybe the Board had better make the College a female institution!

Meda and Tom are still with us, though Meda is on her “p’s and “q’s” to get away and “organise” herself once more. She hasn’t heard as yet from her Saskatoon application, but is expecting to hear any day. This afternoon I am going down to Kitchener with Tom to interview our representative in the House of Commons, Cabinet Minister, the Hon. W. D. Euler, and endeavour to interest him in helping to land Tom in the position of Inspector of Stores, for which he has applied to Ottawa. His application has ben favourably acknowledged, but a little “pull” might help matters. If he should get this job, Meda would then go down to New York and stay with her son and wife until she lands something organically speaking. So here’s hoping for the best of both of them. Robert is back at his banking business at Noranda. He wrote us a few days ago, and said he had no hopes of landing a government job, as the Royal Bank had made arrangements with the Minister Rogers that no employee of theirs should be transferred to a government position. I think Robert would be satisfied with the banking business if he were working in more congenial quarters. What he doesn’t like is to be shoved off into so remote a part of the world and in the midst of a French population. Arthur is still working off and on at the Warehouse. He went down to Brantford last Tuesday, where he delivered an address before a church rally of the Lutheran congregation there. To-morrow a week he will go to Arnprior to preach; and I feel quite sure that after the congregation has heard him that they will give him a unanimous call; and then all his expectative, futuristic troubles will all be over. Lovingly yours, [signed] Carroll 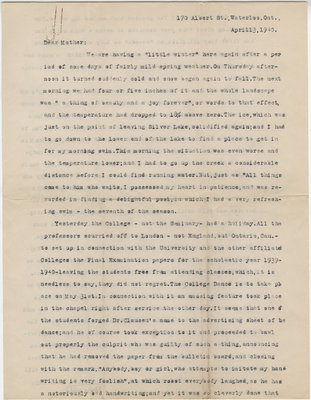