The New Year will have started well on its way before this letter arrives; but I trust it will not be too late for me to wish you and yours God’s richest blessing throughout the coming year. You have seen many years come and go, and the Lord has graciously taken care of you through them all. May His bountiful blessings be continued to you through this latest one also! We all here had a very enjoyable and happy Christmas, a most beautiful Christmas tree with abundance of presents for every one, and a very impressive service. The Gunns declared that they never saw anything like it even in Hollywood. This compliment we took as being a sort of feather in our cap. Then we had our two big turkeys with all their accessories and had a fine feast, at which were assembled all our children and grandchildren, and the Gunns which are our protection in this time of war. Only Robert was missing. He is a very important man in the bank up in Noranda, being on cash, and couldn’t get off even for a couple of days. So we had to send him his presents and some of our spicy food, which he has already assured us he enjoyed very much. Just now New Year is staring us in the face; and because the Gunns are here, Bonnie has decided that we must have another feast. It will not be turkey but chicken this time; but it will no doubt be just as tasty. While I think of it, as Mabel may yet be at home, I will say that Bonnie received her quilt and thinks it so fine that she is bound to buy another one just like it. And so it is, as I always tell her, One thing always calls for another. She will write to Mabel shortly and give verbal expression to her profuse thanks, so that it would be superfluous for me to dwell on this any longer. While I was writing this letter Frederick came in bringing me my monthly cheque from Dr. Schorten. It was thirty dollars short of a month’s pay, but wasn’t as bad as I feared it might be. So I can

still be thankful for small favours. It is never so bad but that it might be worse, and we shouldn’t look gift horses in the mouth, and all that. The big cheque we received around the first of December helped us our immensely through the Christmas holidays. As I received lots of cigars and tobacco and at least three new pipes, I cam smoke the pipe of peace from now till Lent and forget all my troubles. We are having real seasonable weather around here now, neither too cold nor too warm, and with just enough snow to make the ground look white. The clouds have been expectorating snow for the last few days but in such a desultory manner that it hasn’t interfered with walking in our common shoes minus rubbers, galoshes and similar equipment. Frederick finds fault that there hasn’t been enough snow to enable him to try out his Christmas skiis, but he is still hopeful and has had lots of fun skating on the lake and the rinks. As for myself I am still going strong on my daily dips. If I can break the ice up creek to-morrow morning, I will not have missed a single day in December, and will have been in more than 250 times during the year 1939. The coldest dip I had was on the morning of the 27th, when the thermometer registered 2 % above zero; but even so, it was not as bad as if it had been 2 % degrees below; and as a matter of fact I felt good over it. I am making another record this year that may even sound better to you, and that is in reading the New Testament. I set out last January to read the N.T. through once a week through the year. Well, I did a little better than that, and will have completed it the 70 th time by the coming Moday. With all the other work I have to do, that is perhaps not a bad record. The present reading when finished marks the 500th time I have read the book through since 1914, when I began to keep record. I am content to read Old Testament through once a

a year, and am on it now for the 29th time. One can never become too familiar with this noble Book. Herman enjoyed his Christmas with us immensely and went back to his government work in a joyful and happy frame of mind. He likes his work in Ottawa very much, and the environment too; and I am happy to say that he is taking great interest in the church work there in Sunday School and Luther League. He thinks Rev. Lotz, who is one of the most favourite of my boys turned out from the Seminary, is a wonderful preacher and is doing a great work in our Capital City. Our vacation will now soon be over. We begin again on Wednesday, Jan. 3rd with no intermission till Easter; but we have had a nice rest and I am quite well satisfied to start work again. Arthur is still working at the Warehouse and thinks that his job will last until he gets other work. I am hoping that he will receive a call in the early part of the new year. Our president and his wife are expected back on Monday, and should be in a happy mood after spending so long in New York. Well, if there is any more news, I don’t know what it is. Hope Herbert is O.K. again by this time. Remember us to him, to Aunt Claudia, and Aunt Cam, Cousin Gus Little and any other relatives and friends that you may see, and give them all our best wishes for a Happy New Year. With love and hearty greeting to you one and all, I am

Most sincerely yours, [signed] Carroll 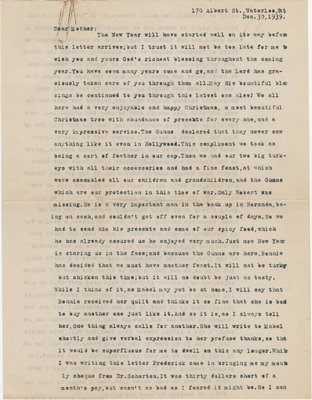