Frederick has finished his letter, and to escape carrying this out to the mailbox (you know the rule) I think I had better begin mine. It looks more Christmasy around here now with a thin coating of snow which came right on the dot that marks the beginning of the winter season, Dec. 31st. This snow, which only makes the ground white, the weather prognosticators assure us, will remain but without any addition over Christmas. I continued my daily dips in the creek up till this morning and inclusive, but had to break fully a half inch of ice this morning in order to get in, and so am doubtful as to whether I will be able to make it to-morrow morning- I may not even try; that depends on the state of the night and the weather. Herman came home like a night owl last night, blowing in on the 1 a.m. train and reaching our huge domicile around two o-clock in the morning, while I was resting unconsciously in the arms of good old Morpheus. The doorbell rang, they say, but it made no impression on my auricular organs, maybe because I am getting old and can’t hear well, or maybe because I was too sound asleep; but fortunately Bonnie, my better half still has sharp ears which recorded the sound from the front door. She hurriedly donned a kimono or something and ran down and loosed the latches and let her returning son come in. I didn’t see him until after breakfast this morning, but when I did catch a glimpse of him, I decided that the Government must have been using him well, as he looked as natural and quite as fat as ever, and was goodnatured to boot. If Robert could come we would have a full family re-union this Christmas; but he wrote us this week that he couldn’t possibly get off, as he is on cash and there is no one else there to handle it. This

put a damper on us, and especially on his mother, who still looks upon him as a little boy roaming far away from home. However, with the Gunns here and all the rest of our family we will have a pretty goodsized crowd to cluster around the Christmas tree and to sit down at table for our Christmas dinner. And, by the way, we are going to have two turkeys of around 13 lbs. each for this festival occasion, which should giveall and sundry a “bellyfull”, if you will excuse such low brow colloquial English. Arthur provided one of the fowls, and between Bonnie and me, we got the other, although it is not yet paid for. Bonnie received a letter from Mabel to-day in which she said that she was leaving for home in Hickory to-night. We sent her a Christmas card the other day and hope she got it before she left Gastonia; but if she didn’t, it is not worth going back to get it. Bikle sent us a cheque for $ 10, which came in mighty good in getting the eats for the Christmas tree and other things. Clarence and Lena inclosed a dollar bill in their Christmas card letter, which being crisp (I mean the bill) made it shine. I hope before the season is over to get around to thanking them for it; but in case you should see them, you might tell them in advance how much I appreciate the fact that “Every Little Helps.” That gracious act sure was Christmasy. This past week with no lectures to attend to, I put in preparing my examination papers for the end of this semestre. I have them all done now but one, which will not take much time to set up. Christmas will be over when this letter reaches you, but we hope that memories of the auspicious occasion will be lasting and that you may all be happy ever afterwards. We have a beautiful Christmas tree this year, and if we get a snapshot taken of it we will send you one. And there promises to be quite a pile of presents under the tree, useful and

otherwise, paid for and indebted for; and we hope that all will be satisfied. Tom, i.e. Mr. Gunn, has been working till ten o’clock at night all this week, but seems to be able to take it and stands under it like a man. I don’t imagine they will need his services after to-night, as the business rush will be all over. I don’t know what he will do then; but he is quite energetic and may land another job. He is a very congenial fellow for a Scotchman, I will say and testify. Meda is also a good sport, and we are all hoping that she will get a good organ before long. She should, as she is an expert along that line. All the College and Seminary boys that are not working in the Brewery Warehouse are away, having left for parts unknown. Arthur is still carrying on at the above named place. He said they sold nearly $ 6000.00 worth of beer yesterday and that they expect to do even better to-day.

[handwritten] My typewriter ribbon got all tangled up at this point so I guess it is about time to stop. Bikle in his letter tells me that Herbert has not been doing so well over his second operation. Here is hoping that by this time he is improving. With all good wishes to you each and all, 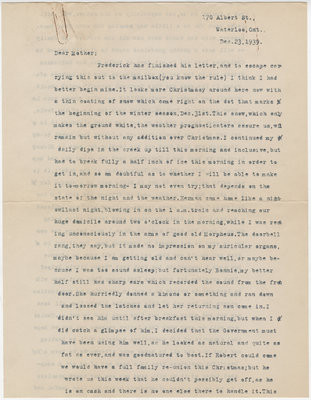