Creators
Little, Carroll Herman, Correspondent
Little, Candace
, Recipient
Media Type
Text
Item Type
Correspondence
Description
Typewritten letter from Carroll Herman Little to his mother, Candace Little, on November 24, 1939. Little describes family life with wife Bonnie and their children, and his work as a Lutheran pastor and faculty member at the Evangelical Lutheran Seminary of Canada in Waterloo, Ontario. In this letter, Little discusses the weather and his preaching.
Notes
Carroll Herman Little (1872-1958) was a Lutheran pastor, and a professor and administrator at the Evangelical Lutheran Seminary of Canada (now Waterloo Lutheran Seminary) in Waterloo, Ontario.

I am writing you early this week, this being a sort of another case of “now or Never.” Don’t worry however, as you will not likely receive this letter any earlier than usual. You see the case is like this: I am booked to preach in the Ayton-Neustadt Parish on the coming Sunday. I had calculated on getting Carolus to drive me up there in his car; but the insurance on his car having run out, he stuck it in is den for the winter, which eliminated that form of conveyance; and about all that was left for me was the train. Now I could take the Saturday evening train and get there about ten or eleven o ‘clock to-morrow night; and that would be all right if I knew where to go; but being unacquainted in that region, I decided that it would be more to the point and decidedly advisable for me to take the morning train from here, which will put me there around 11 o’clock to-morrow morning. The only drawback about this is the long time that I will be away from home, as I can’t get back till nearly noon Monday morning and will probably have to miss a lecture or too. However, I doubt if any of the students will put up a kick over that. I have been very busy to-day getting up sermons and marking test examination papers, besides writing letters to Herman, Robert, and others. So if my present letter should turn out to be unusually brief, you will know how to account for it, and willingly pardon me. I had a letter from Bikle a day or two ago. He told me among other things that Herbert was back in Washington, where he underwent a second operation for his obstreperous prostatic gland. I was sorry indeed to hear of that, but glad to hear from Bikle that his

condition after this second operation was quite favourable; andI trust and pray that he may soon be fully recovered and his congenial old self again. Tom and Meda are still with us, or more accurately just at present Meda is. Tom left yesterday for St. John, N.B. to attend the funeral of his sister “teen”, the only one left in his family. He had a telegarm some days ago informing him that she had had a severe stroke. So he was not surprised when he got the telegram saying that she was dead. He expects to get a couple thousand dollars out of the estate, which will come in very good to him, as he spent most of the money he had saved up while he was down in Hollywood, where he earned practically nothing. He has been very active in looking for a job since he came here and was just landing one when this telegram came. He expects to take up work in Goudie’s clothing store as soon as he gets back. Meda has not been so fortunate and has not got an organ as yet; but she will probably land one sooner or later either here or in Toronto, as she is a most proficient player. In the meantime we are greatly enjoying their visit. It was like getting acquainted with homefolks again. The weather here continues fairly mild, fair at any rate. We have had no snow, although the lake was frozen too hard for me to break the ice the last two morning, and I had in consequence to go up into the woods and take my dip in the creek; but that was better than nothing. I trust that you had a fine birthday and an enjoyable time. May you live long and prosper! A student registered this week by the name of Menzies. His features remind me a little of the Hickory Menzies. Ask them if they have any relatives in this section?I would inquire of the student, but as he is a college student and has paid all his fees, I am not likely to come in contact with him again. This will aheve to do for this time. With love and good wishes from Bonnie and the children as well as from myself, I am Sincerely yours, [signed] Carroll 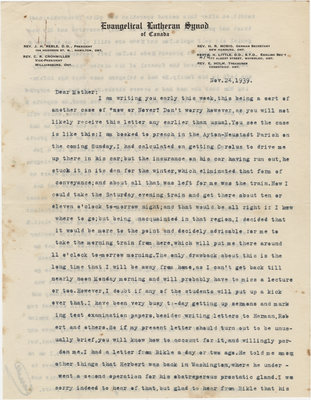