Creators
Little, Carroll Herman, Correspondent
Little, Candace
, Recipient
Media Type
Text
Item Type
Correspondence
Description
Typewritten letter from Carroll Herman Little to his mother, Candace Little, on November 18, 1939. Little describes family life with wife Bonnie and their children, and his work as a Lutheran pastor and faculty member at the Evangelical Lutheran Seminary of Canada in Waterloo, Ontario. In this letter, Little discusses his children, his daily swims, and extends good wishes for his mother's 91st birthday.
Notes
Carroll Herman Little (1872-1958) was a Lutheran pastor, and a professor and administrator at the Evangelical Lutheran Seminary of Canada (now Waterloo Lutheran Seminary) in Waterloo, Ontario.

Remembering that on the coming Tuesday wi ll be your birthday, the 91st in your long experience of life, I set Frederick and Eileen to work on their letters; and as they have just finished them, it becomes my turn to see what I can do. If I can get this Little letter of mine written in time to get it off in the afternoon mail, I calculate that you should get our letter on your very birthday, which would be a happy coincidence, or something of the sort. First of all I want to congratulate you that under the good providence of God you have been preserved to us, your children, through so many long years till you have attained not merely threescore years and ten, but four score years and eleven – a truly wonderful and remarkable such as few ever reach.May God’s richest blessing be and abide with you on this notable day, and may you be happy not only on this day but throughout the remaining days of your life, whether they be many, as we hope, or few! I hope that you will have around you on this occasion as many of your children and grandchildren as are within reach, and that they will all contribute to your joy and good cheer. While I must necessarily be absent, I assure you that my thoughts will be with you and my prayers will ascend to our good and gracious Lord on your behalf. I am only sorry that I cannot send some nice and useful present to you; but at any rate you will know that my heart is in the right place and that I appreciate more than I can ever tell you our good old mother. We are having beautiful weather just now.

The sun is bright and beaming and the temperature is quite mild, reminding us of the good old summer days gone by. This is really Indian Summer. A few mornings this week were fairly cold. In fact on two mornings I had to break the ice for about 40 ft. before I could get into the water for my morning swim; but both yesterday morning and this morning the ice was gone and water wet from the very top to the bottom. It was my 209th swim for the season this morning; and I haven’t missed a day so far since I started in the early spring. We are having some of our folks visiting us at present, Tom and Meda, who have returned to the Old Dominion for good and all after a stay of two or three years in Hollywood. Their son Donald was transferred from the Disney Studio to New York, and given a promotion by his boss the famous Disney. After his departure with is bride, Tom and Meda didn’t have any desire to remain in that far off land ,and so lost no time in turning their tracts Canada-ward. We met them at the train Tuesday or Wednesday night and they have been with use ever since; and I may add, they are good company. Tom has aged wonderfully since I saw him about twenty years ago; but he is still spry and active, though as thin as a beanpole and as a gray as the hoar frost and as bald as an eagle. Meda has held her own better, although she looks about five years Bonnie’s senior. It is too bad that they didn’t get here a couple weeks earlier, as I feel that sure that Meda with her qualifications and gifts and training would have been elected organist at St. Peter’s Church over in Kitchener if given a chance to demonstrate her powers over the organ; but unfortunately they elected an organist just a Sunday or so before she came. Since coming here she has tried for a position as organist in the Baptist church but as the former organist withdrew his resignation, that place to was no longer open. There is just one more prospect, the Presbyterian Church in Kitchener. It is reported that they are or soon will minus an organist. If this turns out to be the case she will put

put in her application there also. They are both anxious to settle down here if possible or at least in some of the cities adjacent, as they have had enough of living far away from all relatives and friends. Tom has been very active in canvassing Kitchener for employment for himself and has one or two places as prospects where he received some encouragement. We would be glad to have them near us too. Carolus and Marge had another rather serious experience to-day. They are living down in their new house now. Well this morning Marge had the baby in his carriage just outside the house, and one of the workmen threw a lighted cigarette out of the window, which all unknown to him fell in the baby’s carr iage. Soon the baby began to cry and a neighbour women rushed in and told Marge she had better go out and see what was the trouble. Marge just got out in time to save the baby from being burned to death, as the fire which was gaining rapid headway had burned through the pillow and wrappings and was beginning to scorch the back of the baby’s head. Happily she arrived in time to save him, and while he had red patches on his head, he was not seriously affected by the fire. But it was a close call. Marge had scarcely got him out of the carriage when all the clothes in it burned in a blaze. Well, this is the climax of the news for to-day, so wishing you a happy birthday and every blessing, I am 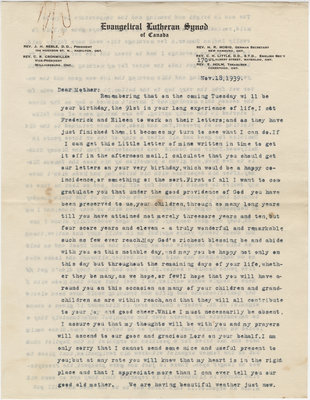