Creators
Little, Carroll Herman, Correspondent
Little, Candace
, Recipient
Media Type
Text
Item Type
Correspondence
Description
Typewritten letter from Carroll Herman Little to his mother, Candace Little, on November 11, 1939. Little describes family life with wife Bonnie and their children, and his work as a Lutheran pastor and faculty member at the Evangelical Lutheran Seminary of Canada in Waterloo, Ontario. In this letter, Little discusses his sons, Arthur and Carolus, the weather, and visiting friends.
Notes
Carroll Herman Little (1872-1958) was a Lutheran pastor, and a professor and administrator at the Evangelical Lutheran Seminary of Canada (now Waterloo Lutheran Seminary) in Waterloo, Ontario.

To-day is “Remembrance” or “Armistice Day” – what an absurdity, with war again on the rampage! But as indicative of the certainty of the end of the world, there will be “wars and rumours of wars, nations rising against nation , and kingdom against kingdom.” But I will not talk about the war : rather I will employ a part of this day in remembrance of you, and try to give you another letter to cheer as far as I am able your charming soul. Just ten days from to-day you will attain another anniversary, an unusial one at that, your 91st anniversary under the blessing of God; for which all your children, I am sure, feel devoutly thankful. But next week this time will be the more appropriate time for me to convey to you my hearty greetings, which I hope to be able to do. Last Sunday I went up country with Carols and Arthur and one of our seminary students from that section. We left Arthur at his preaching point and proceeded to Rev. Binhammer’s, one of the neighbouring pastors. There we had a big chicken dinner and also a gorgeous supper, and were quite royally entertained.R ev. Binhammer was recovering from an operation for hernia, but was up and around. He had Dr. Leupold, Assistant Pastor of St. Matthew’s, Kitchener, preaching for him that day. So I heard him for the first time. He was very good in German. I heard him again over at Rev. Sterz’s at Hanover in the evening. There he preached in English. He didn’t do too badly, seeing he has been out only about two years from Germany. We stayed at Rev. Sterz’s till after 11 o’clock, and it

was one o’clock when we got home Monday morning. Arthur preached three times that day, twice in German and once in English. But whether he will get the call to that parish or not, is still doubtfulDr. Reble consented to allow them to hear several candidates in succession before voting upon any of them. This is contrary to our church polity, and it is disorderly. But when it is allowed by the authorities, there is nothing to be done about it. In such a case the first preacher is placed somewhat at a disadvantage in relation to those that succed him. But as the other men have parishes, if one of them should be called, there would be another vacancy to be filled at which Arthur would stand a chance to be called. Mrs. Binhammer who hear Arthur the Sunday before when he supplied there said that she was surprised at Arthur’s good German, which was practically faultless and far superior to that of any of the young ministers of our synod who had preached there during Pastor Binhammer’s incapacity. I enjoyed that little trip in getting away for a day. It was the first outing I have had since the busy days of synod in that same section. We had a letter from Herman this morning. He expressed himself as highly pleased with his new work and environment. He is also losing no time in connecting himself up with the church there. He wrote that he had been to Rev. Lotz’s church twice already ,had attended one of their Luther League meetings, and had already signed up to teach in the Sunday School. He said Rev. Lotz in introducing him to the young people praised me very highly, ascribing to my instruction his preaching of the sound Gospel to them. As a matter of fact I consider Rev. Lotz one of the ablest and most devoted men that we have turned out from our institution. Herman says that when he preaches even an agnostic would be obliged to sit up and take notice. I was very glad to hear that Herman was starting so soon to take a keen interest in religious things. Carolus and family are still with us, but will be moving into their new

house Monday or Tuesday. We were glad to be able to accommodate them during the interval between moving out and moving in; but it made considerable more work for Bonnie, and she will feel considerably relieved when they take their final departure. Marion and Howard were over to see us Thursday and are coming again to-morrow. Their little “Bobby” is about as handsome a baby as you ever saw and goodnatured too. We are always glad to help them out, as they are in desperately poor circumstances. Howard gets a salary of less than $ 50 a month and out of that has to pay about $ 25 a month for houserent. So you see he hasn’t much left to live on. He is a fine fellow, but handicapped as a provider. Since his father and mother moved to Brantford, we are about the only people left for them to visit. We hear from Robert regularly every week. He hasn’t said anything lately about throwing up his job and coming home and looking for something else; and I hope that he will stick, as a job even in a French country is better than none. We are having fairly cold weather here just now, but no snow. Fortunately the house is heating up a little better than in the early days of autumn. Remember me to Aunt Carrie and Aunt Cam if any of you should get down their way.

With love and all good wishes, I am 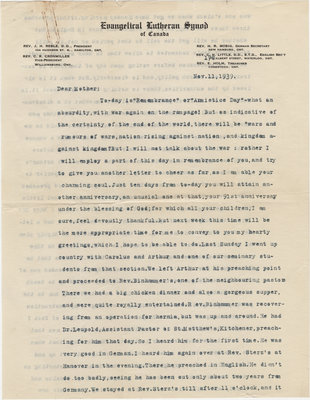