Creators
Little, Carroll Herman, Correspondent
Little, Candace
, Recipient
Media Type
Text
Item Type
Correspondence
Description
Typewritten letter from Carroll Herman Little to his mother, Candace Little, on November 4, 1939. Little describes family life with wife Bonnie and their children, and his work as a Lutheran pastor and faculty member at the Evangelical Lutheran Seminary of Canada in Waterloo, Ontario. In this letter, Little discusses finances and his sons, Arthur and Carolus.
Notes
Carroll Herman Little (1872-1958) was a Lutheran pastor, and a professor and administrator at the Evangelical Lutheran Seminary of Canada (now Waterloo Lutheran Seminary) in Waterloo, Ontario.

As another week’s work is over and the coast is clear this afternoon, I thought it would be an opportune time to write you my letter, even though owing to the dilatoriness of the other correspondents it may not get off any sooner. Eileen has a day off to-day, as she has every Saturday; but she is either overcome by weariness or indulging in laziness, and says she won’t write until tomorrow. And little Frederick is down in Kitchener paying his weekly visit to his oldest sister and her family, and probablywill not be back until around supper time or thereafter. November has set in since I wrote you last week, but so far its entrance has been mild and gentle without wind or storm of any kind, though the air is cool and the morning frosty and the leaves have all fallen from the trees, and everything looks bare. To show you that it is not too cold, I had my 199th swim in the lake this morning and hope to reach the 200 mark to-morrow morning. Carolus and his whole family are all here. After Herman left we had sufficient room to take them in during the interim, while their house is being finished, by changing around a bit. Frederick Jr. is growing rapidly and now weighs over 13 lbs. Little Carl sleeps over at the Clausens, but otherwise he is here all day and part of the night. To-morrow Carolus is going to drive Arthur up to the Ayton-Neustadt parish, which is vacant and where, I presume, Arthur is to preach a trial sermon. Carolus invited me to go along, and I intended to do so until word came yesterday that the second service had been postponed from the afternoon to evening on account of a funeral that was being held in that church in the pm

I don’t like the idea of getting back home so late in the night: so unless I change my mind I won’t go. Anyway I did not intend to go to hear Arthur preach, as my presence might prejudice his cause, but I intended to pay a visit to one of the pastors of a neighbouring parish. Carolus had the misfortune of having his new house broken into by a robber on Tuesday night last. Entrance was effected by prying open a window. The only thing that was stolen however was his radio. Fortunately it was a small one and not very expensive. He paid ten dollars for it, I believe. All the evidence left by the robber was his footprints in the loose ground around the house, which showed that he wore shoes 13 ½ in. long and quite narrow. Notice of the robbery was printed in the Record the next day, but no trace of either the robber or the radio has as yet been found. Just about a week or so previous to this a widow’s house down this street was entered and robbed while she was away from home on a visit. While I’m on the subject of bad news, I will give you another instance within the family circle. Herman, as I think I told you, sold his car just before he left for $ 200. This was to be paid for at the rate of tendollars a month, on which ten dollars was paid down. Evidently the man bought it without the knowledge of his “boss” i.e. his wife. When she got wind of it, she evidently thought that he might use it to go see other women. So she put her foot down on it firm and hard, and told her husband that he had his choice, either to keep her or the car, but not to keep both. He therefore considered the matter carefully, and decided in favour of keeping his wife on the grounds that she would probably last longer than a second hand car. Herman will of course retain the initial payment, which he doesn’t mind; but he will also have the car on his hands and may find difficulty in disposing of it profitably. We had

one letter from Herman since he reached Ottawa. His chum Walter Hamm from Waterloo he found married, and he secured a boarding place with them, which makes his situation pleasant socially. On the other hand they started him off at night work in the government office, which naturally didn’t appeal to him, as he had had plenty of rotten hours and was surfeited with them at the Warehouse. But, of course, he couldn’t kick; and it may be that later on he will secure better hours. He is in the treasury department and has lots of figuring to do. He had another little misfortune. When he went to put on his glasses in order to relieve his tired eyes he found one of the lenses unaccountably broken, which means another little expense for him. But after all he is not discouraged, but is keeping a stiff upperlip and hoping for a better break some day. One would superficially think that almost any break would be better than breaking one’s glasses; but when you come to consider it carefully the breaking of a tooth or a leg or a neck would be after all much worse. We were glad to get Pearl’s letter, which came some time ago, but were sorry to hear that your blood circulation was not just up to the notch, and that you had to take electric shocks again. I hope that they will prove efficient. If they are not, I would suggest that you try alcohol, preferably gin, in small dosesthree times a day. Doctors say that that is quite effective. I haven’t tried it myself, and so can’t speak from experience, but it might be worth trying. The first of this month I received a cheque for a whole month’s salary, $ 155. So while they still owe me over $ 500 back salary, I am not so badly off just now as I was, for which I am thankful. With greetings

from us, one and all, and with all good wishes to you all,

I am as ever

When I went down to the lake this morning I saw six wild ducks swimming in the open space of the lake, i.e. the space not covered over with ice. As soon as these wild birds saw me and perceived that I was coming into the lake, they courteously gave way to me circled around on their wings and then sailed to the north. The fact that they took to the north rather than the south is a sign of the continuance of mild weather. C.H.L 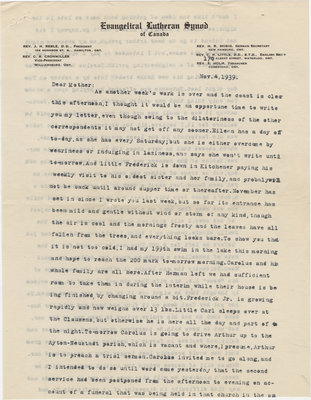