Creators
Little, Carroll Herman, Correspondent
Little, Candace
, Recipient
Media Type
Text
Item Type
Correspondence
Description
Typewritten letter from Carroll Herman Little to his mother, Candace Little, on October 21, 1939. Little describes family life with wife Bonnie and their children, and his work as a Lutheran pastor and faculty member at the Evangelical Lutheran Seminary of Canada in Waterloo, Ontario. In this letter, Little discusses the the weather, happenings in the parish and his sons.
Notes
Carroll Herman Little (1872-1958) was a Lutheran pastor, and a professor and administrator at the Evangelical Lutheran Seminary of Canada (now Waterloo Lutheran Seminary) in Waterloo, Ontario.

As another week has rolled around in the swift revolving whirligig of time, I will try to see what I can do in the way of getting another letter off to you. There isn't much to talk about, so I will begin with the weather. The past week including to-day has been rather on the mild side, altho' the nights for the most part have been a little frosty, and we have had frequent showers of rain, about which the farmers who have still some ploughing to do will not complain. There has been as yet no ice on the dam, so I still go down as regularly as the mornings come around for my daily swim. This morning it was showery, so I had my shower bath coming and going, and did not need to take the one that is locked up in the bathhouse. I suppose Herbert has reached home by this time from his trip to Washington and his experience in the Sibley Hospital. I wrote him a short letter the other day, sending it to his home address. I hope to hear before long that his operation was successful, and that he has been fully restored to health again and that all his organs are functioning normally. Give him my best wishes forhis complete recovery. I was sorry to hear from Pearl's last letter that Aunt Cam was getting worse instead of better in her affliction. I hope that she too is improving. I think I forgot to say anything about this in my last letter. I was especially glad to know, and am deeply thankful that you are holding your own at your great age, which on the 21st of next month - a month from to-day - will be 91. That is a great blessing

from the Lord, for which all of your children, I am sure, are devoutly thankful. The awful war is still going on; but it seems strange that so far so little is being done on the western front, where the stage for world war has been erected. It seems that the nations concerned are loath to take the fatal step that will plunge the world into the whirlpool of destruction. It certainly would be best for all concerned if some way out of it could yet be found before it is everlastingly too late. It would pay each side immensely to make some sacrifices of their claims. Herman has been waiting patiently and expectantly for some word from Ottawa; but so far he hasn't heard a thing. This looks as though the government is itself still doubtful as to whether the last die has been cast and the world war will go on to the bitter end. When that matter is once settled, he will probably hear from them. Arthur is still at home. He had work yesterday and to-day in the Brewry Warehouse. To-morrow a week he will preach up the country in both German and English, and after that he will, I think, have preaching for a few Sundays, once at least in a vacant parish. I hope that he will receive a call soon and be ordained, which would be his only salvation from conscription when it comes. I think it would be on now if it were not for Quebec, which province is unalterably opposed to conscripting man-power for European wars. And for this stand I give those Frenchmen credit. To-morrow I, acting on authority from the president of our synod, am to ordain Candidate Earl Treusch, one of our last year's graduate, who has received and accepted a call to the Milverton Parish made vacant by the departure of Dr. Gomann to take a professor's chair in the Seminary at Saskatoon, of which Dr. Willison is president. If the weather is fine it should be a notable day in St.Matthew's, Kitchener where the ordination is to take place. Dr. Clausen will preach the sermon and the pastor loci, Dr. Schmieder will conduct the service.

Earl Peppler, the fellow Eileen used to go with, enlisted in the army, having nothing else to do, and joined what is called "the suicide squad" - which is one of the most dangerous positions in the war. But the queer thing about it is, that he was to be married to-day, and probably was. He called Eileen up over the phone last night and wanted to come up to see her; but she told him he had better call on the girl he was going to marryto-day. He said other things also, but maybe Eileen will tell you about the conversation in her letter. So I will play "mum" for the present. The Clausens have Mrs. Clausen's sister and her husband from New York visiting them now; but so far I haven't seen either of them. They all went up to Hanover for a visit at Pastor Sterz's yesterday and took Carolus' Carl with them; but they came back last night, and Carl has been as lively around here as ever to-day. Physically we are all in good health; but financially we are down in the dumps again, no cheque having come in since back in September. Since I began this letter to you a phone call came in from Ruth Maurer inviting us to her father's birthday party to be celebrated at her apartment in Kitchener on next Tuesday evening. It will be Dr.Maurer's 80th or 81st birthday. Marion's birthday will be on Monday. I am only sorry that we don't have anything to give her, as she and Howard are in very straitened circumstances; but unfortunately we are no better off , and can't help them. Wishing you on and all every blessing, I am

Most sincerely yours, [signed] Carroll 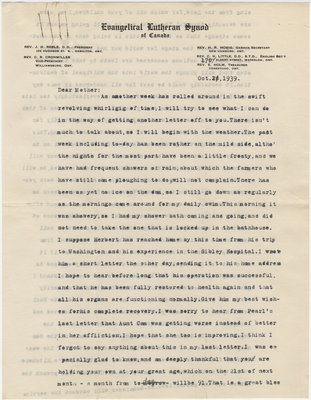