Creators
Little, Carroll Herman, Correspondent
Little, Candace
, Recipient
Media Type
Text
Item Type
Correspondence
Description
Typewritten letter from Carroll Herman Little to his mother, Candace Little, on October 7, 1939. Little describes family life with wife Bonnie and their children, and his work as a Lutheran pastor and faculty member at the Evangelical Lutheran Seminary of Canada in Waterloo, Ontario. In this letter, Little discusses the start of school, his financial troubles, and the war.
Notes
Carroll Herman Little (1872-1958) was a Lutheran pastor, and a professor and administrator at the Evangelical Lutheran Seminary of Canada (now Waterloo Lutheran Seminary) in Waterloo, Ontario.

As Frederick has already written his letter, in order that he might not have to mail it, I think I will do likewise; and then it will be up to Eileen to do the mailing, which will serve her right for her slowness. I put in a pretty busy day to-day, spending the morning in sorting my loose-leaf bursar accounts and putting them in order in the ledger, and spending the afternoon mostly in the garden harvesting the beans. We had several messes of the second crop in October, and would be still having them but for the heavy frost which killed the vines and everything green. During the last two or three days, however, we have had a return of summer, and it is still warm. Just how long this is going to keep up, even the weatherman doesn’t seem to know; but the longer the better. Owing to the frosty mornings and the chilliness of the water I had cut down my swims to halfway across the dam and back; but this morning I went within a few feet of the other side and may make the full trip to-morrow. I think the daily swims keep me physically fit. Some of the ministers of our synod who only get around occasionally tell me that every time they see me I look younger, and they wonder how at my great age, I keep up such a good appearance; but they may be just flattering me. There is so much propaganda going the rounds these days, that one hardly knows what to believe. In wartimes truth takes her flight and the demon of lies comes into ascendancy, and price of everything we eat and drink and wear goes up, and the dictatorial restrictions embarrass us on every side. For instance we can buy only one pound of sugar

at a time. I hope that you in the States will not have to encounter such things; but at present it looks as though your President is going to have his way; and if he does, the United States is almost sure to become involved if the war keeps on long enough. I wrote to Herbert yesterday, and he can tell you just what I think of the situation. I imagine he views the matter very much in the light that I do. The world may have its wars if it wants them, but it cannot escape paying for them in the end. The last war brought no gain for any of the nations engaged in it. It only produced the dictators and this war will in all probability add to their number, if it is pushed to a conclusion. And people who know the truth will be afraid to declare it. I will give you an instance of the truth of this latter statement. At the instance of the Editor of The Canada Lutheran I wrote an article on the relation between Church and State. I saw him last Sunday; and he said my article was fine and that he approved every word of it, and that if it had come in before the war broke out, he would have been glad to publish it, but that under the present situation he did not deem it advisable. I told him that as editor he was the final judge, and that I would not insist on his publishing it. To-day he returned the manuscript to me. And so it goes. The devil rules in time of war. Even Biblical teaching is suppressed. Frederick has old you already in his letter about Herman receiving a telegram from Ottawa inquiring whether he would be available for govrnment service. Herman lost no time in saying that he would. The wages offered are only about half what he is now getting; but there will be a chance for advancement if he makes good, which I know he will. And besides this, if Herman keeps in his present position, he would be among the first to be drafted when conscription come as undoubtedly it will, if the war lasts any length of time.

With a position in the government service he would be exempt. So, I was just as well pleased that he lost no time in deciding, but jumped at the offer. It will at least save him from becoming cannon fodder. Since I wrote you last week there has been another opening of a vacant parish in the Canada Synod; and as there are now two vacant parishes and only one graduate of the Seminary available besides Arthur, I feel quite confident that he will receive a call from one of these parishes before long, and that he will be ordained before conscription comes and be saved from entering the trenches. This will leave only two of my sons available for army service – Carolus and Robert – and with the positions they hold, they will probably get into office work of some kind which will be less dangerous. We have completed already the first three weeks of our new scholastic year in Seminary and College; and they seem to have flown on the wings of the wind, so rapidly did they pass. Everything has been moving along as smoothly as though we had had no vacation or respite. Dr. Clausen was away all this last week up till Friday, having gone to Philadelphia to see that Dr. Reed was properly installed as President of Mt. Airy Seminary. Our own institution ran along in his absence just as well as when he was here; and if he was missed, nobody said anything, or heaved a sigh, unless it was one of relief. But I must close. Wishing you one and all health happiness, and every blessing. I am

[handwritten] P.S. Dr. Clausen went to Toronto to-day to preach the radio sermon for which I recommended him. I knew he wouldn’t turn it down. CHL 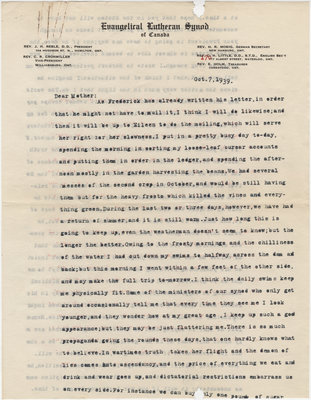