Creators
Little, Carroll Herman, Correspondent
Little, Candace
, Recipient
Media Type
Text
Item Type
Correspondence
Description
Typewritten letter from Carroll Herman Little to his mother, Candace Little, on September 30, 1939. Little describes family life with wife Bonnie and their children, and his work as a Lutheran pastor and faculty member at the Evangelical Lutheran Seminary of Canada in Waterloo, Ontario. In this letter, Little discusses his finances, the weather, and the Second World War.
Notes
Carroll Herman Little (1872-1958) was a Lutheran pastor, and a professor and administrator at the Evangelical Lutheran Seminary of Canada (now Waterloo Lutheran Seminary) in Waterloo, Ontario.

“The melancholy days have come, the saddest of the year”, as the poet would say. In our more prosaic period, we would probably say, Autumn, or fall, is here. And the weather conditions outside to-day make one realise it. It was lazily dripping rain all morning; and this afternoon dull clouds cover the skies, dampness fills the air, and a sense of gloommakes itself felt, which ever way you look. The only bright spot lies in the leaves on the trees, which are beginning to take on their radiently variegated autumnal colours. But I don’t want to fill my letter in talk about the weather, as you probably have some of it down your way too that is more or less thought-provoking and interesting. Our college and seminary have now competed the first fortnight of the current scholastic year, and the gears of the institution, well-greased, are running along smoothly. just like the war of 1914-1918 which after a protracted vacation is hard at it again. Anyway I am glad to be back in the harness again, and am enjoying my work. Another thing that brought some ease to my mind was the taking in of the fees and the consequence that resulted. Iturned in some two thousand dollars in tuition to the treasurer, and told him that I was in desperate need and implored him to do the best he could for me. And he actually sent me a cheque for $ 200.00, the biggest cheque I had received in years. Well, I went down down and paid up all my bills for groceries and meats and clothes and things, and had a few dollar left. Now all I owe is the $ 100.00 that I borrowed from Herman last spring. If I were paid up to date, I would

for once in my life have two or three hundred dollars to the good, but this is almost too much to be hoped for. Having food and raiment, I should therewith be content. Anyway for the present I am in better circumstances than I have been in for a long time, which is something cheering to contemplate. Rev. Pfeiffer of Denbigh, Ont., who is spending his vacation in Kitchener and Waterloo, was around a couple of times this week to play horseshoe with me, and I got all the games but one. This afforded another cheering outlook upon life. In spite of the busy days I had as bursar and lecturer, I read the New Testament through six times in September, which I think sets another record of achievement for me.Before the year is over, I think, I will have read it on an everage of a little better than once a week for the entire year. I think the more one reads it the more he enjoys it; and I believe people ought to read it much more than they do. Arthur has as yet received no call, but is patiently waiting. He works every Saturday at the Brewery Warehouse, where he gets about three dollars a day. This week he worked two days yesterday and to-day. Eileen was out to a dance last night, but she will probably tell you about that. So I will play “mum”. Marion and her mother-in-law, Mrs. Heintz, were over here night before last. The Heintzes are going to move to Brantford early next week. All your great grandchildren are doing fine –that is those up here- are growing like weeds. Little Carl is with us every day, in fact spends most of his time here. In the rise of prices and regulations of quantities purchased, we realise that war is an expensive and costly thing. I hope that the US can stay out of it; but if Roosevelt has his way, as it now seems quite likely that he will, it is extremely doubtful as to whether such will be the case or not. Canada as part of the British Empire could not well do otherwise than go into it. But it is nothing less than “blood-money” when a country sells destructive

weapons to belligerents for the profit it can get out of it; and sooner or later such country will undoubtedly have to pay the price. In a recent issue of The Lutheran, Sept. 20th, I think it was, there were some very sensible things said about the present conflict. Bonnie is all “het-up” about it, but I take it as easy as I can, and read as little in the papers and hear as little about it over the radio as I can get away with. I can’t work up much enthusiasm over the idea of crushing force with force. There surely is and should be some better way.

I am still continuing my morning swims across the lake and back. The water was a little warmer than usual this morning. But I think it won’t be long until I will have to shorten the distance and limit it to going half way across the lake.

But I must draw this letter to a close. We all send you our love and best wishes for health, happiness, and every blessing 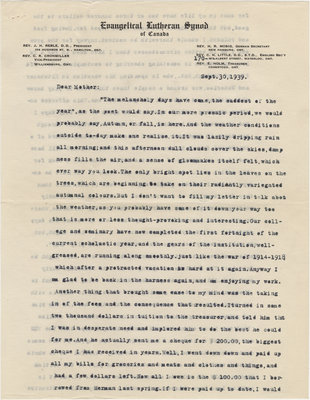