Creators
Little, Carroll Herman, Correspondent
Little, Candace
, Recipient
Media Type
Text
Item Type
Correspondence
Description
Typewritten letter from Carroll Herman Little to his mother, Candace Little, on September 24, 1939. Little describes family life with wife Bonnie and their children, and his work as a Lutheran pastor and faculty member at the Evangelical Lutheran Seminary of Canada in Waterloo, Ontario. In this letter, Little discusses the start of school, his financial troubles, and the war.
Notes
Carroll Herman Little (1872-1958) was a Lutheran pastor, and a professor and administrator at the Evangelical Lutheran Seminary of Canada (now Waterloo Lutheran Seminary) in Waterloo, Ontario.

Pearl’s letter was received one day last week, and we were all glad to get the good news that all is well at the old homestead. We started the new year at our institution last Monday and I put in a pretty busy week in the double capacity of bursar and professor; but I guess I am none the worse off for it. We registered four new students in our seminary, which brings the total up to nine – about an average through the years. So far I have put down on my books 49 college students, all but one of these being full-timers. There may be a few more, who haven’t come in to see me as yet. In cash I took in some $2700 all told, of which amount some $1900 goes for tuition. So I am in hopes that we will soon get at least one round of monthly salaries. In my case this is most sorely needed, as I am completely down and out, and am using my last stamp on this letter. I haven’t had a cent in my pocket for the last week, and will have to let the collection plate pass this morning without adding any contribution to it. But what one doesn’t get, he can’t pay out. But it is exceedingly discouraging to have hundreds of dollars owing you and not be able to get any when it is so sorely needed. It also cramps one in his activities. I had a phone call from Toronto last week asking me to broadcast a devotional sermon over the C B L network on Oct. 8th; but I had to turn it down because I had no way of getting down there and no money with which to hire a way. Perhaps I shouldn’t tell you this doleful news, andI certainly don’t want you to worry; but you know what the Scripture saith, “Out of the abundance of the heart the mouth speaketh”.And this matter with the ever-increasing debts that it involves, is

ever before me. And as prices on everything are going up due to this senseless war, it makes it that much worse. I see President Roosevelt has called congress together for the repeal of the embargo act in order to allow the plutocrats to reap blood money; and he has the gall to argue that such a policy will help to keep the U.S.A. out of the European conflict, when he knows that it would drive them into it more rapidly and more surely than anything else. But in these days money talks, and I wouldn’t be surprised if Roosevelt doesn’t get his way, he himself being of the dictator type; but the U.S. would certainly be well advised to keep out of a war that is no concern of hers. Last week we had a couple visits from pastors of the Canada Synod.Rev. Peters and his wife were hereand Rev. Pfeiffer, and I had horseshoe games with both of the pastors. I was no match for the former, but succeeded in trimming the latter. I am still swimming across the lake and back, but don’t know how long I can keep it up, as fall is here and the water is steadily becoming cooler. We have had some very heavy white frost already, and there are more to come. Our second crop of beans is still bearing.Bonnie picked a big potful yesterday for dinner to-day, and they look fine and dandy. We are expecting the N.Y. Fairites, Carolus and Herman home to-night. From cards they wrote, we infer that they had a pretty good time .They will no doubt tell us something of the outside world when they get here. But I must close before I strike bottom. So with love and all good wishes, I am

P.S. I had a letter from Aunt Nora last week. From what she says I infer that Aunt Carrie cannot live much longer, and that she must be a terrible sufferer. 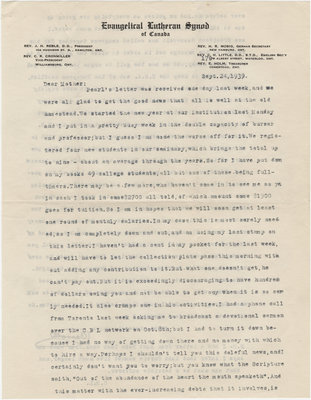