Creators
Little, Carroll Herman, Correspondent
Little, Candace
, Recipient
Media Type
Text
Item Type
Correspondence
Description
Typewritten letter from Carroll Herman Little to his mother, Candace Little, on September 17, 1939. Little describes family life with wife Bonnie and their children, and his work as a Lutheran pastor and faculty member at the Evangelical Lutheran Seminary of Canada in Waterloo, Ontario. In this letter, Little discusses the weather, the war, and his garden.
Notes
Carroll Herman Little (1872-1958) was a Lutheran pastor, and a professor and administrator at the Evangelical Lutheran Seminary of Canada (now Waterloo Lutheran Seminary) in Waterloo, Ontario.

It is real cool this morning after the hottest week we have had all summer. One day during the past week the thermometer reached94 degrees in the shade. This was the official thermometer: others went still higher. It was too hot even to play horseshoe in the evening; but yesterday afternoon around 4 o’clock there was a sudden change, and the thermometer dropped perhaps as much as 50 degrees throughthe night. So we can’t complain about heat anymore, and autumn promises to come in on time. This morning down at St. John’s we are going to have the dedication of the new pipe organ, which was being installed through the summer months, and is at last ready for consecration. It has been equipped with chimes and all other modern attachments. The total cost of the organ and its equipments is over $ 8000.00, of which a little over half has been paid in. So we were all begged in a requesting letter to bring in a special contribution toward the organ fund this morning. But if they are all like me, they won’t get much; and this is putting it mildly- as a matter of fact they won’t get anything as I am putting my last cent in my regular envelope collection. I am hoping however, though I may die in despair, that when the students’ fees come in this week they will pay us a little without further delay. On Monday we will have our Seminary registration and on Tuesday that of the College; and then another year’s work will have begun. The war is still on, as you are all perhaps more or less painfully aware. Our government declared war, but for the present did not declare conscription. They are neglecting no

know methods of propaganda, and it is only a question of time when conscription will be on us in full force. The whole situation is tragic and bodes no good. The war will as it appears at present be long and bloody; and whichever side wins, it will make for the spread of Bolshevistic Communism throughout the world. The outlook, to my mind, is extremely gloomy. The nations wills simply have to reap what they have sown. Herman and Carolus left yesterday morning early for a visit to the World’s Fair in New York. They expect to put in a full week down there. In the meantime Arthur istaking Hermans place at the Brewery Warehouse. This gives him some work to do and will probably ease his mind a little. He was getting fed up with lying around and having nothing to do; and I was afraid that if this went on long enough, he might be prevailed upon to enlist. It would be a shame for a theological student with his ability and long training to wind up his career as “canon fodder”. There is another opening for a pastor within our synod now, St. John’s., Montreal being vacant. This makes two vacancies to be filled shortly. So I think there is a good chance for Arthur to have a parish before long. We had a meeting of the Executive Committee of Synod last week, and I talked the matter over with our President, and he promised to do what he can for Arthur. We had fresh beans out of our garden a couple times last week – the second crop. This was bacause I turned a deaf ear to Bonnie’s pleas to weed out the garden and make it look “pretty and neat”. The grass protected the plants and kept them moist and they produced again, which all goes to show, as old Shakespeare so wisely says, that there was “method in my madness.” Well, I have just about reached my limit, and so will close for this time. With love and all good wishes, I am Devotedly yours, [Carroll] 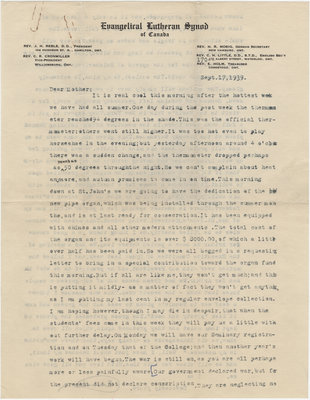