Creators
Little, Carroll Herman, Correspondent
Little, Candace
, Recipient
Media Type
Text
Item Type
Correspondence
Description
Typewritten letter from Carroll Herman Little to his mother, Candace Little, on September 9, 1939. Little describes family life with wife Bonnie and their children, and his work as a Lutheran pastor and faculty member at the Evangelical Lutheran Seminary of Canada in Waterloo, Ontario. In this letter, Little discusses the economic effects of the war, the potential conscription of his sons, and the publications of his new book.
Notes
Carroll Herman Little (1872-1958) was a Lutheran pastor, and a professor and administrator at the Evangelical Lutheran Seminary of Canada (now Waterloo Lutheran Seminary) in Waterloo, Ontario.

Of the writing of letters there seems to be no end. This is the fifth letter that I have written to-day, i.e., when I have got it done. The weather here has been quite fall-like all this week, there being near frosts almost every night. Still we have had no fire in our furnace, and with the war on, there probably will be none as long as we can stand the cold, as everybody will be trying to save coal. Prices of everything are going up by leaps and bounds and limitations on amounts purchased are being made. For example, we are not allowed to purchase more than two pounds of sugar at a time in spite of the fact that sugar has long been a glut on the market. Eggs and everything that you eat have advanced in price, and we are beginning to feel the pinch of things in the big bills that we are rolling up, especially when no money is coming in with which to pay them. The storekeepers are on the alert to take advantage of the situation, and the purchaser pays the piper. Carolus had an offer the other day of the position of quarter master in the army with assurance that his place in the Mutual would be held open for him on his return from the army when the war is over. I haven’t seen him since he received this offer and don’t know that he intends to do about it, butI would advise him to take it, as it would involve very little personal danger. Conscription has not as yet been passed by our House of Commons at Ottawa, but it is certain that it is only a question of time when this will be done, as the war promises to be an extended one. And if Carolus

waits to be conscripted, he will be in line for the trenches and nothing else. Herman says if he had such an offer, he would snap it up without hesitation, and that is the way I feel about it. It is altigether too bad that we are in such a predicament, but it seems that the nations are incapable of learning by experience and will have to suffer what they bring upon themselves by their evil doings. I am inclosing a few stamps which Pearl may be able to make use of. I received a letter to-day from Dr. Neudoerffer to whom when he was here last summer I gave my manuscript on NEW TESTAMENT HANDBOOK with a view to its publication in India. He writes me that manuscript is now in the press and will be out in about a month from Aug. 22nd. He will thensend me 50 copies for my own use and disposal, will keep 30 copies for himself to use in his seminary, and will put the rest in stock to be drawn upon by himself and myself as the need may arise. The book is particularly for use in seminaries, but also sufficiently popular in style for general use. It will be about twice the size of my former book. The beauty about the whole thing is that it doesn’t cost either me or Neudoerffer a cent, as he induced the Board of Foreign Missions to stand the cost of publication. So if I can sell my fifty copies or more, I ought to make a little money out of it. This was indeed good news coming as it did to-day, our thirty-first wedding anniversay. I also received to-day notification of anniversary celebrations of two churches in my first parish in Nova Scotia, and I at once wrote them greetings to be read on those occasions. Robert left us on Monday afternoon and returned to his work in faraway Noranda. Botha Bonnie and I write to him regularly every week at different time, so that he gets two letters from home every week, which keep him informed and help to keep his spirits up. Arthur has preached every Sunday

since his return, but has no appointment for to-morrow. I hope that he will soon get a call from some parish and be ordained. Otherwise he will undoubtedly be conscripted as soon as conscription is imposed in Canada. His German, I fear, will not be of much service to him as far as preaching goes, as the churches are cutting out the German very rapidly now. St. John’s will hold its last German service to-morrow morning, and all the other churches in the Twin-City have already cut out theirs, deeming prudence the best policy under the present situation. It may be, however, that German services will be continued in the west, where the German is far more necessary, and he may get a call from there, although I haven’t heard from Rev, Weidenhammer as yet. Our Seminary will open a week from Monday and the College on the following day, but I doubt whether we will get enough students to remedy the financial situation materially, and I am looking for still harder times ahead, though I hope and pray that I may be disappointed. I wrote quite a few articles for our church paper during the vacation that is now nearly over, and a couple of them are still to come out yet. Bonnie received Mabel’s nice letter early in the week and intends to reply as soon as her hands are free enough from housework and canning and innumerable other things to hold a pen in her hand. We send you all our greetings and best wishes for health and happiness. I am still taking my daily swim as usual, and at this date have only one competitor, a Scotchman who takes care of the Post Office; and being a Scotchman

I don’t think he goes in on Sunday. So I think I will have all the dam to myself to-morrow morning. I still have a game of horseshoe for exercise and enjoyment with one of my neighbours, a Mr. Tripp. He is very good at the game and generally heats me, but I sometimes give him a close run, as e.g. to-day, when the final score was 25 to 24 in his favour. Well, I think I will stop here and leave a little news for the rest of them to tell.My friend Rev. Schmidt of Buffalo paid me a brief visit one night this week on his return home from his vacation spent in a cottage up on Lake Huron. He is a fine fellow and never fails to give me a call and a cigar or so. With love and all good wishes, I am as ever,

P.S. I am to preach at the Joint Church Council men’s convention of the Kitchener-Stratford District at Baden to-morrow night. Herman is going to drive me out there. It is only about twelve miles away. 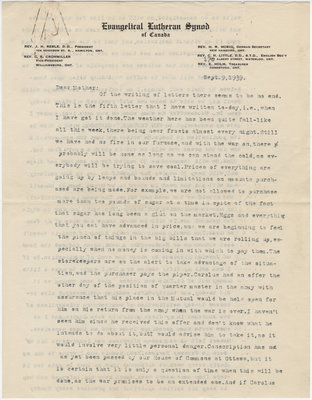