Creators
Little, Carroll Herman, Correspondent
Little, Candace
, Recipient
Media Type
Text
Item Type
Correspondence
Description
Typewritten letter from Carroll Herman Little to his mother, Candace Little, on July 29, 1939. Little describes family life with wife Bonnie and their children, and his work as a Lutheran pastor and faculty member at the Evangelical Lutheran Seminary of Canada in Waterloo, Ontario. In this letter, Little discusses his writings, his son Arthur, and his garden crop.
Notes
Carroll Herman Little (1872-1958) was a Lutheran pastor, and a professor and administrator at the Evangelical Lutheran Seminary of Canada (now Waterloo Lutheran Seminary) in Waterloo, Ontario.

As Eileen has written her letter I thought I might as well get busy and write mine to-day today too. But it is still doubtful as to whether you will get the letter any sooner or not. That depends on Frederick. He has gone down to Marion’s, as he usually does on Saturdays, and I don’t know how soon he will be back. Ifhe should get back before the mail goes off to-night, all will be well and good; but if he doesn’t you will get this letter on the usual date. So you can pass judgement on the young lad as soon as it arrives. With all my synodical work done, I am taking it fairly easy these days, passing the time in reading, writing, but omitting arithmetic. Maybe you saw the article entitled, “Now or Never”, that I had in last week’s LUTHERAN. I was surprised myself that it got in; for as a rule they don’t accept my writings, either because they are too deep, or because they do not agree with their sentiment. Bonnie pronounced this last one “too deep” for her understanding. I wrote it because some heretical views had been published on the subject by one of our pastors. I have to keep up my reputation as the “canon of orthodoxy” around these parts. I have just sent in another article to our Canada Lutheran on the “English Versions of the Bible”, in which I attack vigorously the private versions and the “butchered Bibles”. If, and when it is published, it will make Clausen hot. I have also written another article on “Biblical Inspiration”, which I haven’t sent in yet. This with my Bible reading and reading of the Greek New Testament, and with my correspondence and garden work is about all

that I have been doing to keep from being idle. We were pleased to receive a card from Mabel this morning, informing us that she may come up after all, as we had about given up seeing her smiling countenance this summer. We hope she won’t be guilty of disappointing us a second time. We were glad to hear also from her card that Bikle and Hazel and retinue arrived safe and sound, right side up and all that; and no doubt you enjoyed their company. I suppose they will be too tired and fagged out after their golfing expedition in the mountains of the Old North State to pay you a return visit on their way back home. I was sorry to hear of the terrible taking off of Carl Crouse as narrated in Mabel’s previous letter and in the clipping inclosed. Carl and I used to be great chums in our boyhood days, and I was saddened to hear of his so sudden and cruel end. You will notice that I have some synodical paper again. Maybe I had it last week and commented upon it; but I am so “disgustipated”, as Andy would say, that I will repeat myself, and demonstrate my indignation over the failure to note in the heading my change of address, after having served official notification of the same to the proper authority. So, even if I should fail to scratch out 177, you will still address letters to me at 170 Albert St., where I am actually living. But as I don’t want to get myself worked up on a hot day, I will say no more on this subject. I am still the only fish out of water, as it were, on Seminary hill, but the Clausens and Prof. Creager are expected back to-day or to-morrow at the latest; and Dr. Schorten is booked to return on Monday or Tuesday of next week. Robert has a birthday on Monday. I managed to squeeze out a dollar and sent it to him this morning. At the same time Bonnie sent him a shirt and tie. So, even though he is far away among the Frenchmen, hecan pat himself on the back that is not forgotten. We are expecting Arthur to arrive now in ten or twelve days. It is hard to say just now where he will land for his permanent work. Rev. Weidenhammer

says there are a couple good openings in the west, where they can use him in bi-lingual work. So if he doesn’t get work in the Canada Synod, he may go there; and I believe he might go further and do worse. No doubt he will be happy to be in “the land of the free and home of the brave” again; and this doesn’t mean the U.S.A. either. A Mr. John Harms, a friend of the Schortens was here for a couple days, leaving only this morning. He is from New York city, and he tells me that we have more liberty over here than they ever even dream of over there since they have been under Rooseveltianism with all its alphabetical maneuvers. Every once in a while the monotony of our lives is broken up by a call from a vacation-roving pastor. We had one, a Rev. Kappes from Milwaukee drop in on us to-day. He was one of our students away back in the twenties, and I hadn’t see him since the Milwaukee convention of the U.L.C.A. years and years ago. It was good to gaze into his beaming countenance once again. Bonnie has been very busy these days – canning, canning strawberries, currants, and at present beans. Our beans, in spite of the dry weather, are a wonderful crop. I picked two big pails full this morning, and at that stripped only two rows. The corn hasn’t come on yet, but is looking fine. Carolus is moving from his cottage into town. He has rented temporarily a small apartment across the street from where he was, and will remain there until his new house is finished around the middle of October. Robert is still at Neranda, but is anxious to get away, and will move as soon as he can get another job elsewhere. We were glad to hear that Jennie Lee was having so good a time down in Florida. But I must close. Bye bye. [signed] Affectionately, Carroll 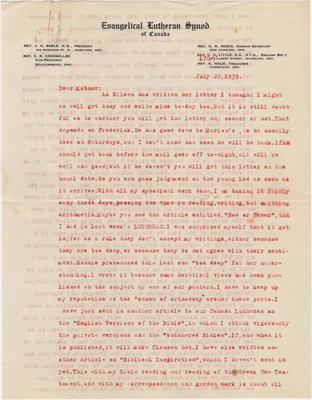