Creators
Little, Carroll Herman, Correspondent
Little, Candace
, Recipient
Media Type
Text
Item Type
Correspondence
Description
Typewritten letter from Carroll Herman Little to his mother, Candace Little, on July 23, 1939. Little describes family life with wife Bonnie and their children, and his work as a Lutheran pastor and faculty member at the Evangelical Lutheran Seminary of Canada in Waterloo, Ontario. In this letter, Little discusses the weather, his garden, a fishing trip, and his work.
Notes
Carroll Herman Little (1872-1958) was a Lutheran pastor, and a professor and administrator at the Evangelical Lutheran Seminary of Canada (now Waterloo Lutheran Seminary) in Waterloo, Ontario.

You will probably sit up and take notice that I am using the letter heads again. This is because I received my annual supply yesterday. One trouble about it is, that each year the supply gets smaller and smaller, till in time I think it will vanish away, dying of slow consumption. Another trouble with it that might well have been avoided is that my old address, 177, is put down instead of 170. This was altogether inexcusable, as I had notified our President in writing that the address should be changed. But Presidents are prone to make mistakes, as the senate and congress of the U.S. are well aware. For instance, I agree that it is downright stupid to pretend that a nation is working for peace when it sells arms and amunition to one side of belligerants and not to the other. But I am so disgusted with the propaganda that is going on that I don't want to talk about it or start an argument. Here silence is golden. Today we are having the first hot day that we have had for two weeks. It started off at 80 this a.m., and is still mounting; but prospects are good for showers, and I sincerely hope that they will come, as both gardens and grass are getting quite dry. But so far we have been living quite high off our garden, with beans in profusion and raspberries and currants and other things in good measure. In fact I think I am getting "forty and fat" as the old saying goes: but don't blame me, blame the vegetables and Bonnie who cooks them up so fine. On Monday last I went fishing up in the desert wilds about twenty miles from here. Rev. Weidenhammer, who is spending his vacation here, took Frederich and me and an old uncle of his up to the

the fishing ground in his car. We had an outing and a great day of it, even if we didn’t do ourselves great in fishing. Frederick and I had the honour of catching the only two black bass that were hooked. I caught a number of "shiners" and other little fish. Rev. Weidenhammer was the only one to catch any brook trout. He landed four, but they were scarcely bigger than a hornyhead or large minnow. ----Just at this point I had to let up and go to church. Rev. Weidenhammer preached, and in his sermon gave an account of conditions in the west and made a strong plea for the support of Home Mission work in that area. In spite of the warm weather the church was filled to capacity. We had a letter from Arthur this last week, in which he said that he had changed his mind about prolonging his stay in Europe, and that after visiting the chief Luther places, he would proceed to England and book passage on a steamer leaving there on the 28th of this month. He expects to be accompanied by one of the Lehman boys from Saskatchewan, who completed his course at Erlangen this year. Arthur is anxious to get home in time to celebrate his birthday, which occurs some time next month. His mouth is already watering for some of his mother's good cooking of which he has been deprived for so long. I had a letter also from a certain golf-crazy guy, who goes by the name of Bikle. Yesterday he was to start off for the mountains of North Carolina accompanied by his body guard, his wife and the rest of the feminine van Houtens, where he expects to lose as many golf balls as he can pay for, and then to pay a flying visit to Hickory where he hopes to get a glimpse of you and the rest of the family from the tower or top of Hotel Hickory. Maybe he is there already when this letter arrives. If he is, tell him I got his letter all right, and will answer it in due time, after he gets back home and settled again in his peaceful practice. I finished copying the Minutes of Synod in the Protocol on Wednesday,

and sent out copies of the printed Minutes to the officers and boards of the U.L.C.A.; and now my work along that line is done again for the year. Since then I have been loitering along, hardly knowing what to turn my hand to, there being nothing pressing demanding my attention; but I managed to spend the time somehow, and caught up at least, I think, with all my correspondence. I had a card from Dr. Schorten, who seems to be having a whale of a time over at his daughter's in Scranton, Pa. Dr. Reble called yesterday, and expressed himself quite strongly over the mess Dr. Clausen has made of things here in this institution; but then he was talking to me, and not to Dr. C. When it comes to Board meetings, he is notoriously a soft stepper. I don't know whether Eileen told you about all her fellows in her letter or not, but she seems to have a whole slue of them on the string since she entered the Rubber Factory office, and left Earle in the lurch. They range all the way from Beatty to Lundy and Dunke (Pronounced, "Donkey"), and Thaler. Just now Thaler is in the ascendancy with Duncke a close second. Thaler is the Baptist fellow or beau, and is very straight laced, which is strongly influencing and changing Eileen's views on dancing, smoking, and other diversions. If she keeps this up she will soon be as prim as a Puritan. Marion and family are going to London, Ont., to-day with his father and mother on a visit to relatives and friends. So they won't be up to-day, and I will have no horseshoe game with Howard, "More's the pity!" as old Shakespeare would say if he were alive to-day. The only news from the Howard-Marion Heintz family is that little Bobby, has a TOOTH, and can now bite like a ferocious tiger. Marguerite, Carolus' wife, was here yesterday. She is "expecting" some time next month. We were looking all

week for a letter from Mabel, stating definitely the fact and the time of her visit, but so far we have been disappointed; but we console ourselves with the thought that we will soon see her anyway. I had a card from Aunt Nora last week stating that Aunt Carrie was steadily getting worse and sinking. So I wrote her again the other day. But I must close. With love and good wishes to you, one and all, 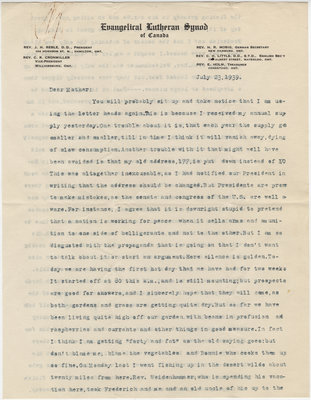