Creators
Little, Carroll Herman, Correspondent
Little, Candace
, Recipient
Media Type
Text
Item Type
Correspondence
Description
Typewritten letter from Carroll Herman Little to his mother, Candace Little, on July 16, 1939. Little describes family life with wife Bonnie and their children, and his work as a Lutheran pastor and faculty member at the Evangelical Lutheran Seminary of Canada in Waterloo, Ontario. In this letter, Little discusses the weather, his garden, Arthur's plans to return home from Germany, and vacation plans.
Notes
Carroll Herman Little (1872-1958) was a Lutheran pastor, and a professor and administrator at the Evangelical Lutheran Seminary of Canada (now Waterloo Lutheran Seminary) in Waterloo, Ontario.

Having come home from early church this morning I will try to fill in the time between this and dinner in typing off my letter to you. Things are more or less dull around here, there being nothing doing, and so there isn’t much to tell. But they always say that that’s the time I write the longest letters, I, like old Shakerag or spear, making “much ado about nothing.” So here goes. We have had the coolest weather for the past few days that I ever saw in July. It has been so cold that some people have actually put fire in their furnace; and Bonnie, who a few days ago was complaining outrageously about the heat, is now even more vehement about the cold; but as for myself, I never complain about the weather, so the wind don’t blow. I have had a sufficiently busy week to keep me from bothering about anything else, much less the weather, seeing all my botheration wouldn’t change it anyhow. I got my Minutes finished back in the week and have sent out a few copies already. This being done I sat down to the transcribing job and have been working quite steadily on the Protocol. I have recorded over half the Minutes in that superfluous book already, and expect to get the job done by the middle of this week. I could get it over with even a little earlier, but I am taking a day off to-morrow and going fishing. Rev. Waidenhammer, one of our earliest graduates, who has been labouring in the West since graduation, is here on his vacation. He is going up into the wilds and brooks of the near north country on a brook-trouting expedition, and has asked me to accompany him. Frederick is also going along with us, as he wants to learn the art of fishing too. The only other passenger that we are taking is an uncle of Rev. Waidenhammer’s, a Mr. Schneider, an old man of 87 years of age, but an ardent fisherman. If we old fellows get tired of the job, we can sit back and let the younger fry do the fishing.

Rev. W. is a good horseshoe player too, and has been up to my courts several times this past week for a trimming, which he invariably got. This is the time, you know, when pastors get their vacations. So we had another surprise visit the past week in the person of my good old-timer friend, Rev. Bermon of New Brighton. Pa. We had a very pleasant conversation over reminiscences of ancient times that we spent together. Rev. Bermon, though he has been now for many years in the United States, says he is still a Canadian at heart; and I think he would come back here in a minute, if he had the chance. Last Sunday I preached a special educational sermon at Woodstock. Counting the three that came with me in the car, I had 18 in the audience of the congregation, and I pointed out to those eighteen why they should send their sons and daughters, if they had any, to Waterloo College. Woodstock is a mission and holds church in one of the rooms of the parsonage, the congregation sitting on chairs. The pastor was away preaching a trial sermon for another call. Looking at the matter from a worldly standpoint, he might go further and do better. Woodstock is about forty-five miles from here; but in spite of that, though service was out at five minutes before twelve, we got back home at twelve o’clock. This shows you what a wonderful car Herman has, in spite of its being secondhanded.

We had a wonderful strawberry season this year, and have been eating them steadily for the last two or three weeks; but they are on their last legs now. While the going was good Bonnie canned two or three crates of them. We have also had beans out of our garden, radishes and carrots, and Popeye spinach; and my corn and cabbage are growing by leaps and bounds. We have been looking every day for a letter from Mabel, telling us that she is coming and when, but so far none has put in an appearance. Bonnie has talked about writing every day, but has been so busy with canning and other things that she didn’t get around to it; but at the same time she is very anxious that Mabel should come, and wants me to make that emphatic, which

I am here and now trying to do. Tell her to shake a leg and get a move on herself. We had a letter from Arthur this past week. He intimated that he may come home earlier than he anticipated, and may limit his tour of Germany to the chief Luther places. He says the foreigners are getting out of Germany bag and baggage, and that he may possibly follow suite. I do not know what he will do when he gets back, as there is no opening around here, or in the Canada Synod. Rev. Waidenhammer tells me that there are a couple good openings in the west, where he would be quite acceptable. So he may cast his longing eyes in that direction. The Creagers got back toward the end of last week, but he is leaving again to-morrow for the Boys’ Camp at Fisher’s Glen down near Buffalo, which lasts for two weeks. As Dr. Schorten is leaving also to-morrow, I will be the only professor that is left high and dry on the hill. The contractors have begun work on Carolus’ lot on William St. and will begin building operations this week. He has one of the most beautiful building lots in the town of Waterloo. He and his family are still out at the cottage by the Grand River; but during the week Carolus gets his dinner here. Robert sent his mother a belated birthday present of $ 7.50 the other day. This was the easy extra money that he earned nights in working over some hotel books in Noranda. He will have a birthday himself on the last day of this month, for which I am trying to save a dollar. Marion and family were over on Thursday. Little “Bobby” is growing like a weed, but looks more like a beautiful blossoming flower. I don’t think of any more news, so Au revoir! With love and all good wishes to you and all the rest, I am 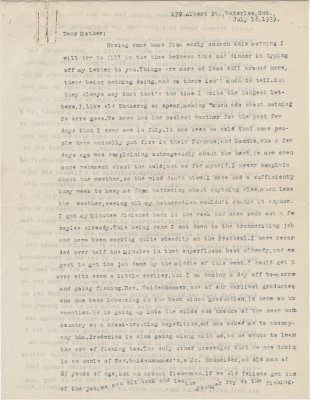