Creators
Little, Carroll Herman, Correspondent
Little, Candace
, Recipient
Media Type
Text
Item Type
Correspondence
Description
Handwritten letter from Carroll Herman Little to his mother, Candace Little, on May 24, 1936. Little describes family life with wife Bonnie and their children, and his work as a Lutheran pastor and faculty member at the Evangelical Lutheran Seminary of Canada in Waterloo, Ontario. In this letter, Little discusses the weather, swimming in Silver Lake, and the Waterloo College baccalaureate service.
Notes
Carroll Herman Little (1872-1958) was a Lutheran pastor, and a professor and administrator at the Evangelical Lutheran Seminary of Canada (now Waterloo Lutheran Seminary) in Waterloo, Ontario.

It is now after supper and I am late in getting a letter started to you; but “better late than never”, as the old saying goes; and you will get it at the same time anyway. So there isn’t anything lost after all. We had a fine day to-day. It opened up with a shower, which conveniently let up in time for me to take my 51st swim for the season in the lake in the park before breakfast this morning. I was a little later than usual in getting down there to-day, and I found two people, presumably a man and his wife, dressing after their earlier dip. The day was a little threatening, but cleared up later on and became fine and clear and cool. This day was notable in that it was the day for the baccalaureate services for the College graduates, ten in number. The services were held in St. Matthew’s Church, Kitchener, Pastor Schmieder preaching the sermon and Dr. Fox, president of the University of Western Ontario, delivering an address to the graduates. I had a little part in the service, having been selected to read the General Prayer and pronounce the Benediction. The whole service was broadcast and this was the first time that my voice was ever heard over the air. Some of

the children, who stayed at home, said that my voice carried over very well, and Mrs. Clausen paid me the doubtful compliment of saying that my voice carried better over the air than it sounds close at hand. President Clausen actually took Bonnie and Marion and me down in his car and Dr. Schorten in the bargain. The Church was well filled and Pastor Schmieder preached a wonderfully fine sermon. Dr. Fox’s address was also very good. We had dinner rather late to-day, and after dinner Herman and I and Mr. Rae and a young man visiting his place had three long games of horseshoe. Mr. Rae and I played Herman & the other “guy” and we came out victorious in all the games. I simply mention this because it is a rather unusual thing for me to come out on top in this particular game. We finished our Seminary examinations last Friday and held our faculty meeting in the afternoon, at which we passed on the grades, promotions, and prizes. Arthur had the highest grade in the Seminary passing in the 90’s on all subjects, and was awarded the Maeder Memorial prize, which will pay for his tuition next year. We will hold our graduation services in St. John’s Church here in Waterloo on Tuesday night. I wore my fine hood, received from Bonnie and the children on my recent birthday, for the first time this morning and expect to wear it again on Tuesday night. I think it is the nicest hood of them all, and it makes me shine up – particularly from the rear. This is quite fitting, as professors should emit a sort of refax light to the students who

follow after them. I don’t know what I will do with the long vacation before me. Already I am feeling more or less like a fish out of water. I am like the fellow that was all dressed up and with no place to go. It is of no use for me to busy myself with writing manuscripts, as I can’t get them published anyway for lack of funds. I can’t buy books and have read most of those in our Seminary library that are worthwhile. I can, and probably will spend considerable time in my garden; but, after all, that will take up only a small portion of my vacation. However, synod is coming on shortly and if I am re-elected secretary for the tenth time, that will give me plenty to do for awhile. I already have the “Bulletin”, which contains the major reports, proofread and in the printers hands. I expect it to be out this week. On Tuesday we have our executive committee meeting, with considerable business before us, which will probably take all day to dispose of. So, I suppose, time will fly, and the vacation will be over before we know it i.e. unless it is extended indefinitely. I understand that there is a movement on foot to close the seminary and continue only the college. But I am sure that, if this is attempted, it will not meet with the approval of synod; and so I am not concerned about that. But if the institution is to continue synod will have to make another drive for $10 000 to cover current expenses and back

salaries over and above the usual budget for the institution, and I am not so sure that the synod will agree to undertake that. However, time will tell. I am enclosing Frederick’s and Eileen’s letters. Eileen has been complaining for the last couple days of pain in her right side, and I am afraid she is being threatened with appendicitis. I wanted her to go down and see the doctor, but she doesn’t want to go. But if the trouble doesn’t soon pass, I will either have to send her down to him or have him come up. But I must close. With love and all good wishes to you all, I am 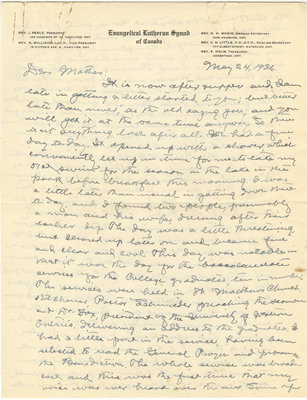