Creators
Little, Carroll Herman, Correspondent
Little, Candace
, Recipient
Media Type
Text
Item Type
Correspondence
Description
Handwritten letter from Carroll Herman Little to his mother, Candace Little, on March 29, 1936. Little describes family life with wife Bonnie and their children, and his work as a Lutheran pastor and faculty member at the Evangelical Lutheran Seminary of Canada in Waterloo, Ontario. In this letter, Little discusses the weather, his birthday celebration, and Arthur's first sermon.
Notes
Carroll Herman Little (1872-1958) was a Lutheran pastor, and a professor and administrator at the Evangelical Lutheran Seminary of Canada (now Waterloo Lutheran Seminary) in Waterloo, Ontario.

Dinner is over and I have had my little nap, and now the time has come again to write a line or two to you. The weather is beginning to be spring like, most of the snow and ice has melted off the streets, and the sidewalks are again quite nice and dry. However, we have had already a few pre-April showers. I encountered one this morning on my return from Church that threatened damage to my white collar and would actually have carried out its ugly threat, had I not erected my coat collar as an adequate protection. But now the sun is shining brightly again, and you would never know that it had ever rained. If this sort of weather keeps up, it won’t be more than a few days before the ice moves out of the lake and the good old swimming hole will be open again. Yesterday I fixed up the horseshoe courts and just for practice threw a few shoes; but I haven’t had a game as yet. However, as “all things come to him who waits”, i.e. provided he doesn’t expire while waiting, I hope to have a horseshoe game before many days are over. I am looking forward also to the close of Lent when I can smoke “the pipe of peace” again in real old Indian fashion. I have got along fine so far this year in the act of abstention. I didn’t

experience any heart-burn, as I did at times in previous years during the lengthy fast. I guess here also “practice makes perfect”. Another thing: I have fully succeeded in carrying out my Lenten resolution to read the N.T. through once a week during the season. So far I have read it through six times since Lent began on Ash Wednesday, Feb. 29th. I think this is a very good way of keeping Lent and I would commend it to others. Since I wrote you last week, I am a year older. I am getting so old now that I think I must feel and show my years, which may not be a bad thing if it leads to serious reflection and to the betterment of one’s ways. My birth-day passed off very uneventfully. Outside of the family there were only a couple others who took any notice of it, which was as it should be after one reaches so advanced an age. Happily, due to my preaching last Sunday I had a little money to distribute according to my custom and got rid of about two dollars, every member of the family getting a little of it. But I was completely taken aback by the presents I received. Carolus and Marge each gave me a can of tobacco, and the whole family clubbed together and bought me at great expense a doctor’s hood. It is a real beauty and well and handsomely made; but while I appreciate it and while it will dike me out to perfection in the scholastic processions which occur once or twice a year, I can’t help but feel that it was an unwarranted extravagance in view of the financial situation in which we find ourselves so deeply involved at present;

and I wish they hadn’t done it. Just as this point I broke off to take a game or two of horseshoe. I played one game with Herman, who beat me rather badly, say around 2 to 1. Then I played three short games with Mr. Rae, our next door neighbour. These games were quite close, but he won two of them to my one. I see where I will have to do some more practicing, if I am to hold my own in this game. Arthur is going to Hespeler this evening where he will preach his first sermon to-night. He has made a couple addresses before societies in the Seminary and in St. John’s. and has conducted chapel services several times in both English and German; but this will be the first time that he has preached. Dr. Schorten said with reference to his German chapel services that he spoke a purer German than the boys from Germany, as he didn’t have any dialect. He is a fine student in the Seminary and makes good grades all around. I predict a great future for him. Marion went to the Heintz’s for a chicken dinner to-day; but we didn’t miss her at the table as Carolus and Marge were here and the table was filled up as usual. To-morrow night Bonnie and I expect to attend a service at Dr. Willison’s Church in Hamilton in connection with the dedicatory service which was held to-day. I am supposed to make a little speech. Dr. Clausen is taking us down in his car. Well,

I will close now while the closing is good. Wishing you and yours God’s blessing, I am 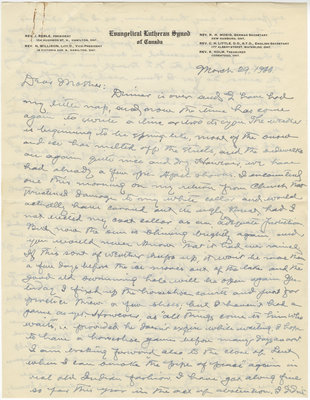