Creators
Little, Carroll Herman, Correspondent
Little, Candace
, Recipient
Media Type
Text
Item Type
Correspondence
Description
Handwritten letter from Carroll Herman Little to his mother, Candace Little, on December 1, 1935. Little describes family life with wife Bonnie and their children, and his work as a Lutheran pastor and faculty member at the Evangelical Lutheran Seminary of Canada in Waterloo, Ontario. In this letter, Little discusses his financial problems, and that it has been 2 months since he received a paycheque.
Notes
Carroll Herman Little (1872-1958) was a Lutheran pastor, and a professor and administrator at the Evangelical Lutheran Seminary of Canada (now Waterloo Lutheran Seminary) in Waterloo, Ontario.

Just a few lines to-day, as news is as scarce as the proverbial frog’s hair, which, as you know is the scarcest thing in the world. But if I can’t give you a real letter, I will do the next best and give you an apology for one. I was down at Church this morning, and for the second Sunday in succession, I suffered the collection plate to pass by without putting in the contribution which I did not have. I always take it the “it is accepted according to that a man hath, and not according to that he hath not.” This, according to Paul, is good orthodox doctrine. To make sure that I would get a letter off to you to-day, I addressed an envelope to you the first of last week and put on it the last stamp that I had and stuck the stamped envelope away for use to-day. Perhaps I was a little over-cautious, as Bonnie got a few stamps during the week and would probably have given me one in the emergency; but I thought it would be well to play safe. They are now two months behind on my salary, and I have no idea when any money is coming, so I am just “gritting my teeth and bearing it”, knowing that it is “the making of the pup”.

It used to be that professors’ salaries were paid before anything else; but under the Clausen regime, all other debts are paid first, and if anything happens to be left over, the professors get a little on their salary. The result is that we have to live all of the time on credit, which is stretched sometimes almost to the breaking point. But it seems that there is nothing that can be done about it. To-day opened up nice and bright, but by the time I returned home from Church it was snowing. It is still hard at it and is very dark and gloomy into the bargain. Winter seems to be setting in with the first winter month, and the lake is frozen over solidly barring all swimming. So I am hibernating in the bath-tub these mornings. Carolus and Marge are up every day to see how their house is coming on. The foundation is finished and set and window and door frames are assembled, and work on the wooden frame will proceed this week. So they think satisfactory progress is being made and are hopeful that it will be finished on scheduled (Pronounce ‘sheduled’, not ‘skeduled’) time. It seems that this couple is going to have a temporary separation from one another during the holidays. Maybe it will “make the heart grow fonder”, and maybe not. Bonnie said that I should tell Pearl that in spite of her ocular affliction, she is gaining in avoirdupois or something. She thought she was being pulled down and getting awfully thin. But when she was down town the other day

and weighed she tipped the beam at 132 lbs. However, she counts it only 131 lbs., accounting for the extra pound by her overshoes, which she had on. But, even so, she might have “gone further and done worse”, as the quaint old saying reads. I wrote “M.L.” and Florence a congratulatory letter and sent them the same silver five cent piece that I sent to Clarence and Lena on the occasion of their Silver Anniversary some years ago. I hope they will take the hint and return it, so that I can use it for the next anniversary. If they don’t, I don’t know what I will do, as “Poor folks has such poor ways”, you know. Frederick is enclosing a little letter to you. He thinks he just must write to his grandmother and inquire about her health. He writes his letters all alone without any help. Just now he is keeping his finger nails clean every day and hopes to get the prize for being the cleanest child in his room, as well as standing first educationally. We had Dr. and Mrs. Maurer with us on Tuesday of last week. He is looking well for an old fellow and seems to be enjoying his period of retirement. They live at Woodstock, some 80 miles west of here. Marion and Howard gave me a pound of tobacco the other day, so I am not suffering a smoke famine. Well, I must close. With love and all good wishes, I am 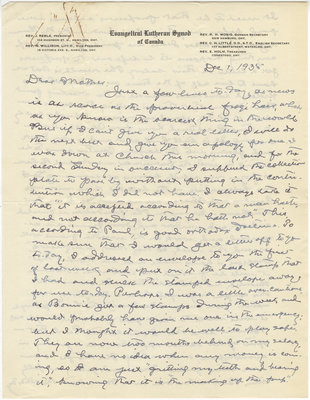