Creators
Little, Carroll Herman, Correspondent
Little, Candace
, Recipient
Media Type
Text
Item Type
Correspondence
Description
Handwritten letter from Carroll Herman Little to his mother, Candace Little, on November 24, 1935. Little describes family life with wife Bonnie and their children, and his work as a Lutheran pastor and faculty member at the Evangelical Lutheran Seminary of Canada in Waterloo, Ontario. In this letter, Little discusses the weather, swimming in Silver Lake, Bonnie's eyesight, the new house that Carolus and Marguerite and building and Mrs. Froats' accident.
Notes
Carroll Herman Little (1872-1958) was a Lutheran pastor, and a professor and administrator at the Evangelical Lutheran Seminary of Canada (now Waterloo Lutheran Seminary) in Waterloo, Ontario.

Pearl’s letter was received last week and was read with joy and gladness. While this is written to you it is also intended as an answer to her letter, and I trust she will accept it as such. We were particularly glad to hear that you had a canary again. Both Bonnie and I held and had expressed the opinion that Herbert would get you a new bird and that he was only awaiting the opportunity to procure and deliver it. Pearl’s letter only confirmed our preconceived opinion. Another thing, we both are of the opinion, i.e. if you have not already named the bird, that he should be called “Victor Herbert”. Our raison for this is not so much that Herbert supplied the bird, which was on his part no work of supererogation, but because “Schubert” seems from Pearl’s account to be an unlucky name, and we think it is time to experiment on something different. It is desired to commemorate the memory of the dear departed, I would suggest that the bird be called “Carroll III”, in memory of Carroll II who killed him and of Carroll I who suggested his replacement. Besides if he should turn out to be a good signer as we all hope and desire, he should “carol” anyway. However

this is only a suggestion, which may be taken for what it is worth. We all hope that you enjoyed your birthday and had all the company and the presents that you could enjoy. It is not many people that can celebrate 87 birthdays and enjoy them besides. But here’s wishing you still many happy returns. Eileen has written you most of the news and has told you how I have stopped swimming and why. This leaves me very little to add. But I will say that I had 75 swims in the lake since coming home and up to the time that they turned the water off. On two occasions last week the lake was frozen over all the way across and I had to break the ice. This, however, I could do with my hands as it was not very thick. My last swim in the lake was on the 22nd. Since then I have taken to the bath tub like a duck take to water. Financially, owing to the non-appearance of cheques, I am having pretty tough sledding just now, I haven’t had a cent of money since last Monday when I had five cents left over from Sunday. I ran out of tobacco last week and thought I would have to begin my Lenten fast rather early. In fact I did start on it for nearly a day; but Robert’s sharp eye took notice of my sorry situation and that night he brought me a package of tobacco when he came home from work. Bonnie also took pity and got me another one. So I am all set again and puffing away as usual. Herman sent in a barrel of cider last week and this afternoon we siphoned it into my barrels. So now I am pretty well provided for for the winter thanks to my boys.

I think on the whole I have a pretty fine family – one that is pretty hard to beat and of which I may particularly feel proud. Carolus and Marge are here now on their return from visiting their new house, which they go up to see every day. It hasn’t progressed very far as yet, only the hole being dug and the cribbing put in; but it is naturally very interesting to them. To-morrow the workers will pour in the cement. I never had the pleasure of watching the building of my own home, and can therefore scarcely estimate the interest they would have in the progress from “a” to “izzard” of its construction. Mrs. Froats, Dean Froats’ wife, while on a visit to her home for the funeral of her sister, met with an accident falling down the stairs backward and broke her right shoulder blade and fractured the vertebra back of the neck, and is in a very serious condition. Dean Froats was away all last week, but returned yesterday. I doubt whether she will ever recover from this accident. If she does, she will probably be more or less helpless the rest of her days. Eileen has told you of the deer meat we had for dinner to-day. It was the meat of a young deer and was as tender as chicken and very delicious. Bonnie’s eyes are not much better. Dr. Zwick gave her some tablets, which ease the pain for a time; but otherwise they have had little effect. He did one good thing, however, and that was, that he disabused her of the idea that her trouble came from her fall. He

told her most emphatically that such an idea was “damn nonsense”. He thinks as I do that her trouble is largely due to the nervous condition due to the stage of life which she has now reached. In that case, she should be better by and by. Well, I have no other news and so I will bring my scrawl to a close and write you again next week if my stamps hold out. With love to you all and all good wishes, 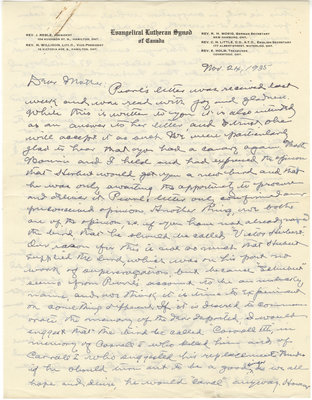