Creators
Little, Carroll Herman, Correspondent
Little, Candace
, Recipient
Media Type
Text
Item Type
Correspondence
Description
Handwritten letter from Carroll Herman Little to his mother, Candace Little, on October 6, 1935. Little describes family life with wife Bonnie and their children, and his work as a Lutheran pastor and faculty member at the Evangelical Lutheran Seminary of Canada in Waterloo, Ontario. In this letter, Little discusses the weather, his financial situation, Bonnie's health, and a family beer party at Carolus' home.
Notes
Carroll Herman Little (1872-1958) was a Lutheran pastor, and a professor and administrator at the Evangelical Lutheran Seminary of Canada (now Waterloo Lutheran Seminary) in Waterloo, Ontario.

Maybe you think it is a long time between letters; but you should possess your soul in patience; “all things come to him or her who waits.” Since I wrote you last week we have had a period of consistently cold weather; but that is the only respect in which it was consistent. Otherwise it rained and stormed and blew and snowed till we began to think that winter was actually upon us. Yesterday morning the ground was white with snow and this morning there was plenty of ice and a frost so white that it might easily be mistaken for snow. To-day, however, is nice and bright, though still quite cool. As I have been going down to the lake every morning without intermission for a swim, I have had full benefit of the weather, and know what I am talking about. Our first snow fell on the third of October and we had snowsqualls every day since until to-day. I don’t think you could beat that ever in the South. I received from Herbert the signed form – proof of my age – which you so kindly filled out. It came on Monday, the very day I expected it; and I sent it in at once to the Mutual, and have since received notice from

the company that it is satisfactory. So my insurance is in full force now for another year. Thank you for your trouble in the matter.

I have still another item of news of an optimistic nature. On Thursday of last week I received another cheque, my salary for the month of August. I don’t have much money left from it – just about enough to meet my electric light and water bill when it comes in; but I was able to pay off a number of bills, which was a matter of some satisfaction to me. I had borrowed $145 from Marion, and I paid her $45 - on account and put the balance on current expenses. I hope that some time they will catch up on our salaries. Then we can live, even though we can’t lay up anything for the proverbial “rainy day”. It makes it bad when we never know whether or when we will get any money. But I always comfort myself with the thought that things are never so bad but that they might be worse, or words to that effect. Bonnie has been busy canning since she came home and has about 185 quart jars of fruit in the cellar to carry us over the coming winter, to “keep the little life we have till the coming of summer.” It was a good year for peaches and plums, and they were also fairly cheap. Cantaloupes are also “in full bloom”, as it were, and we have been feasting for the past week or so. Bonnie has been quite well since our return except for her eyes. She has been suffering very much from them, and still is. I don’t see any way out of it, but for her to go to the oculist again, which I

think she will do this week. In her present condition she can neither read nor write, which deprives her of about all the enjoyment she has in life. I hope, however, that she will soon get relief. She wants to write to you all, but can’t do so in her present condition. One night last week all the men in our family including myself and Marion and her ‘boy-friend’ Howard were down at Carolus’ for a beer party. Between us we had no trouble to finish up a case – 24 bottles of ale. I have been very busy since I wrote you last week with my seminary work; but it has been going along fine, and I am enjoying it, which is the main thing. The little children are all in school and are getting along fine and making progress. The smaller ones, Florence & Frederick, had about 3 days off the past week, owing to a Teachers’ Convention. They enjoyed their little vacation and will resume work with more vigour on Monday. Bonnie and I often think of and talk about our fine visit with you, just about a month ago now. It is a sweet memory to both of us. But I must draw my letter to a close. Sending you and the rest our love, and wishing you God’s richest blessing, I am 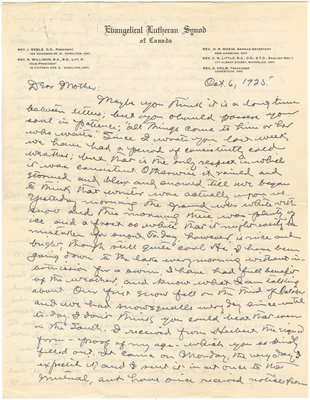