Creators
Little, Carroll Herman, Correspondent
Little, Candace
, Recipient
Media Type
Text
Item Type
Correspondence
Description
Handwritten letter from Carroll Herman Little to his mother, Candace Little, on February 24, 1935. Little describes family life with wife Bonnie and their children, and his work as a Lutheran pastor and faculty member at the Evangelical Lutheran Seminary of Canada in Waterloo, Ontario. In this letter, Little discusses the upcoming choir festival led by Healey Willan, and plans for Carolus' marriage to Marguerite Clausen.
Notes
Carroll Herman Little (1872-1958) was a Lutheran pastor, and a professor and administrator at the Evangelical Lutheran Seminary of Canada (now Waterloo Lutheran Seminary) in Waterloo, Ontario.

The day for writing you has come again, and although I have very little to write about, I will go through the motion anyway and give you a little to think about. It is just as dull outside as it is within – dark, dismal cloudy, but not very cold. In fact the snow, of which we have great abundance and which necessitated my shoveling again yesterday, seems to be melting a little to-day. But we are promised colder weather again by to-night. I went to Church down at St. John’s this morning and heard how bad the nations of the world are and how they learned nothing from the great expense in life and wealth of the Great War, but are going in for war and more of it than ever before – all this set forth in great detail. I was rather relieved when I got back home again, where at least there is peace. There is going to be a sort of “Singfest” down at St. Matthew’s on Wednesday night of this week. It will be in charge of Dr. Willan of Toronto, who is head of the Metropolitan Singers of that city and the leading authority on Church music in the province, or

perhaps in all Canada for that matter. There will be between 25 and 30 massed choirs present on that occasion; and they say that a great [?] is in store for all who attend. Rev. Schneider sent me an invitation to appear with the other Lutheran pastors of the Twin City on the platform. So I hope to take it in. It will also be broadcast over the air. I heard a good joke, in which I was involved last week. Prof. Klinck of the College and his wife were dining out with neighbours, when one of them said to him: “Who is that bachelor professor who goes by nearly every day without hat or coat or gloves?” He laughed and said, That’s no bachelor; that man is Dr. Little and has ten children. “Oh” they said, “We thought he was a poor bachelor in his late forties, who had no wife to take care of him.” I take it that that was somewhat flattering to me, particularly the reference to “the late forties”; but it was sort of a slam on my good wife.

Preparations are going forward toward the approaching wedding. Yesterday Dr. Clausen went down with the couple and purchased for them a nice bedroom suite costing something over $100. I bought, on credit, Carolus a nice new overcoat, his old one being somewhat shabby. Bonnie bought them some bedding. Marion collected some money from Marguerite’s fellow workers in the Mutual and purchased them a nice present yesterday. She and Howard are giving them a present – an armchair or something. And so it goes on. They should be pretty well

set up when everything is in. They are paying $28 a month rent for their apartment, which will keep them running pretty close unless Carolus should get a raise shortly. But then nearly everybody else is in the same box; and since “misery loves company”, this should be nothing to worry about. I am sure Bonnie started out with much less than they are starting out on; and we are still here and going strong.

We has a missionary – a Miss Jenzen – from Liberia deliver a lecture in the chapel on Friday afternoon. She gave a very interesting account of her experience in mission work in that benighted portion of the world.

I had a letter from Bikle the other day. He and his were taken quite by surprise over the news I had given them about the approaching wedding, and [?] to send their best wishes to the couple.

But here I’m getting back to the same old subject with which I began and had better stop before I repeat myself. Wishing you, one and all, every blessing, I am 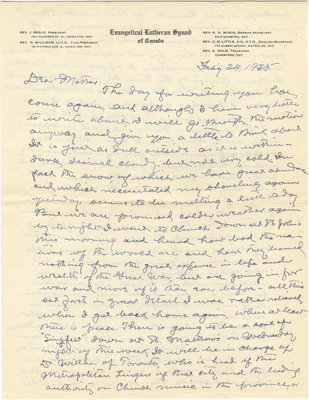