Creators
Little, Carroll Herman, Correspondent
Little, Candace
, Recipient
Media Type
Text
Item Type
Correspondence
Description
Handwritten letter from Carroll Herman Little to his mother, Candace Little, on January 15, 1933. Little describes family life with wife Bonnie and their children, and his work as a Lutheran pastor and faculty member at the Evangelical Lutheran Seminary of Canada in Waterloo, Ontario. In this letter, Little discusses Eileen's broken leg and the effects of the depression on the congregation of St. Paul's Lutheran Church in Bridgeport.
Notes
Carroll Herman Little (1872-1958) was a Lutheran pastor, and a professor and administrator at the Evangelical Lutheran Seminary of Canada (now Waterloo Lutheran Seminary) in Waterloo, Ontario.

I am all alone in the house tonight. Bonnie and the older boys have gone to Church, and Howey and Marion and the younger set have gone down to the hospital to see Eileen. You will see from her letter that she has broken her leg. I was down to see her this afternoon and got her letter, which I am enclosing. She is getting along nicely and is quite bright and very cheerful. She said she was sorry she didn’t finish up her first sentence right, and that she ought to have written, “Now don’t get excited, And don’t be misled; For all that I did was to break my leg.” It was a very unfortunate accident, but couldn’t be helped. She does not know just how it came about, as it happened so quickly. To save expense I had her put in the public ward. She gets just as good attention there as in a private or semi private ward, and at about half the expense. And she is quite well satisfied there. They have only four or five other patients there – all women – and the room is large and cheery. As it is, it is costing me considerable. The ambulance and X ray alone will cost me about $25. But I don’t think she will need to stay in the hospital more than a week or ten days. So I ought to get through on about

$40. It will push me pretty hard to save up that much, and especially now that Bridgeport is letting up on services. I preached down there this morning, but they told me to announce no services until the 29th. A number of the members, they told me, gave excuse for not coming to Church that they had no money for collection. I told them to tell them that that should not keep them from attending Church and that they should come without collection, “that it is accepted according to that a man hath and not according to that he hath not.” The depression has hit Bridgeport pretty hard and the collections have not been sufficient to keep up services every Sunday. I will miss the five dollars that the service brings in; but otherwise I will not mind it. Next Sunday will be the first Sunday in over 2 ½ years that I have not preached. This is more than the regular pastors of parishes can say, as they all get their annual vacations. I summoned the annual meeting of the congregation for the 29th. There was a fairly good congregation present this morning and we should have at least a quorum present on the 29th. Next week or rather this week and the following week will be taken up in the seminary as well as in the College with the first semester examinations. There will be no lectures, but plenty of work in sitting in on examinations and reading and marking of papers. But it is a change, and as such a sort of rest. Tell Pearl Bonnie has had all kinds of trouble with her waffle-iron. She wanted to be extra-careful about it and so she consulted all the old “hags” in the neighbourhood; and they all said, “Grease it first.” So she greased it. And then

the automatic did not work and it burned the first and only pancake into smithereens and left the inside of the waffle-iron as black as the ace of spades or any other “nigger” – much to Bonnie’s disgust. She has spent hours trying to clean it and it isn't very clean yet, and worst of all, we have had no pancakes. Here endeth my tale of woe. You know the Rev. Hirtles are our neighbours. Well, when the Christmas season was on and the Christmas spirit in the air, I went over and paid them a call. I saw Rev. Hirtle and some of the children, but the women didn’t show up. It’s a matter of fact I haven’t seen Mrs. Hirtle since long before Pearl was here – have not even had a glimpse of her. I doubt if I would know her any more if I did see her. That is what I call good neighbours – they never bother you. I always forget to tell Pearl about the train she sent Frederick for Christmas. He got it all right, and it lasted him about one day, after which it went out of commission. But as he had a much longer and bigger one from Marion and Howey, he didn’t mind the loss. You should hear Frederick sing. He knows nearly all the popular songs going and can carry their tunes. His last favourite is “Little Brown Jug Don’t I Love Thee,” which he sings with gusto and to ­­­­­­perfection. Dr. Zwinck told Bonnie the other night that it wouldn’t be long now till she was 100% cured. But I must close. With lots of love and all good wishes, I am 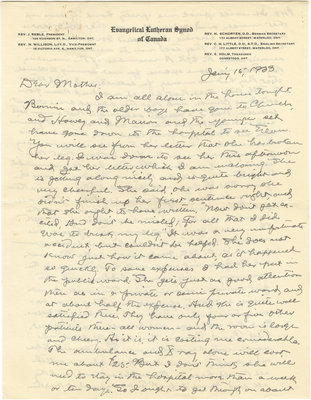