Creators
Little, Carroll Herman, Correspondent
Little, Candace
, Recipient
Media Type
Text
Item Type
Correspondence
Description
Handwritten letter from Carroll Herman Little to his mother, Candace Little, on April 24, 1932. Little describes family life with wife Bonnie and their children, and his work as a Lutheran pastor and faculty member at the Evangelical Lutheran Seminary of Canada in Waterloo, Ontario. In this letter, Little discusses Carolus' photography business, the weather, swimming in the creek, Ruth's birthday and a conversation between Frederick and Bonnie.
Notes
Carroll Herman Little (1872-1958) was a Lutheran pastor, and a professor and administrator at the Evangelical Lutheran Seminary of Canada (now Waterloo Lutheran Seminary) in Waterloo, Ontario.

Your most welcome and highly interesting letter was received a day or two after I wrote you last week; and, as your letters always are, was greatly enjoyed. I will spend a little time this afternoon in endeavouring to answer it. Last week for a couple days we had almost summer weather. It was so warm that I let the furnace fire go out. But yesterday a cold wave came along and I had to kindle it up again. To-day is nice, bright, and sunshiny, but the air is still cool. I took advantage of the fine weather last week to walk out to the creek for a dip and found the water nice and warm – almost too warm: there was no “kick” to it. They still have the water out of the lake in the park, which shuts off swimming there. A little while ago I had a set of horseshoe with Robert, as a result of which I am no longer champion. He got two games out of three. This is not surprising seeing he made as many as six ringers in a game. But I am “game” still, and not yet ready to give up. I am enclosing a snap

of Frederick taken by Carolus to-day. It was taken down at Carolus’ shack on the Henkel premises and is a sorry background; but Frederick’s expression is good and perfectly natural. He wanted me to send this to his “grandmommy”. To show a sample of his brightness and readiness at repartee, I must give you a conversation between him and his mother yesterday. Bonnie said to him, “Frederick do you know how old you are?” He replied, “Three years.” Bonnie said, “No, you are half past three.” Quick as a flash he said “I am not a clock.” Carolus has not been doing anything worthwhile in the picture taking or developing line. But he took a number of snaps of the athletic performance at the College yesterday and so far has orders for some 200 pictures in consequence of which he is quite encouraged and thinks he is on the line to success and that his prosperity is just around the corner. He also got an order for some pictures from the First English Lutheran Sunday School with the assurance of more provided these turn out O.K. I hope that with the coming of summer and fine weather he will be able to do something worth while, unless in the meantime, he should strike another job. As to pursuing the correspondence course on Accountancy, that is altogether out of the question on account of lack of funds. Such courses cost money, and like his father he has none.

Herman does look a little thin in that picture which was due to his long and hard siege of ear trouble. He is, however, picking up again and looks better now. He expects to get his B.A. on May 27, ie if I can raise the $15 for his diploma; and I hope to take Bonnie down to the convocation in London on that date. Ruth has a birthday on the 26th, Tuesday next. I think she will be 13, but I wouldn’t be sure, as it may be Eileen that is around that age, in which event Ruth would be about 11. I was sorry to hear of Mr. [?] death, though he must have reached a ripe old age. I remember him quite well, but do not recall your schoolmate Mrs. Bost. Bonnie is feeling fairly good this week and friends who saw her at the Athletic show yesterday thought that she was looking remarkably well. But I must close for this time. With lots of love and all good wishes, I am as ever most sincerely yours, 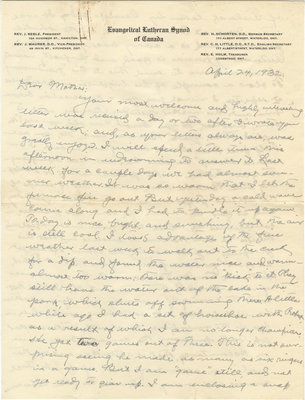