Creators
Little, Carroll Herman, Correspondent
Little, Candace
, Recipient
Media Type
Text
Item Type
Correspondence
Description
Handwritten letter from Carroll Herman Little to his mother, Candace Little, on January 17, 1932. Little describes family life with wife Bonnie and their children, and his work as a Lutheran pastor and faculty member at the Evangelical Lutheran Seminary of Canada in Waterloo, Ontario. Little discusses the weather, Bonnie's plan to sell the piano to buy more furniture, and updates about the Carolus and Marion.
Notes
Carroll Herman Little (1872-1958) was a Lutheran pastor, and a professor and administrator at the Evangelical Lutheran Seminary of Canada (now Waterloo Lutheran Seminary) in Waterloo, Ontario.

This afternoon I will endeavor to write you a few lines again. I preached at Bridgeport this morning, walking down and back. The weather was bad. It rained all night last night, turned cold toward morning and ice covered the road and all trees and everything else that was visible and exposed. It was a sight for sore eyes and resembled the picture that I am enclosing except for the absence of snow. However, this afternoon the temperature moderated and all the ice is now again off the trees, the fences, the fields and the telephone wires; and the temperature is quite moderate. I don’t think we have ever had a January so free from snow. The snow fences have had absolutely nothing to do this winter, the ice has entirely gone out of the lake, the placid waters of which invite to a swim, of which I have taken advantage a time or two. The weatherman, in sympathy with the world in general, seems to have turned topsey-turvey, or something else. There is not much news for me to write about this time. In the seminary we have just completed the first semester work; and beginning this week, we will hold the mid-year examinations. I have all

my examination papers made out, and will let the students do the work this week. I understand that one of the criticisms that Miss D. Morkley had to offer was that the professors both in seminary and college did practically all the work, while the students were more or less interested listeners. But that was due to the fact that she happened to strike lecture periods only. Bonnie is writing a letter to Pearl to-day. She may or may not have told of her condition. For the past few days she has had a very bad cold and coughs for long periods at a time. This sets her back some what and has its effect upon her nerves. Dr. Zwicks wants to see her again and I will take her down there probably sometime this week. The long siege has had its effect upon her spirits, which in consequence are usually quite low. She advertised her piano last week for sale. Three parties came and looked it over, but none of them bit. The price asked was $100, which I think was quite reasonable. But it is a hard thing to sell pianos just now. Bonnie’s idea was to sell the piano and with the proceeds invest in a Chesterfield set. She thinks, and perhaps is she right, that all our furniture is wearing out and going to pot, and is anxious to get in something new. The piano is about the only thing we have to sacrifice, and as we are unable to give any of the children lesson and it is only an ornament, there seems to be no reason why it should not be exchanged for a more useful ornament. As a matter of fact, we haven’t had enough money to have it tuned in the last five years or so. So when she decided to sell it, I

had no objections to offer. But I doubt if a sale will be effected. This year has been particularly hard on us on account of expenses incidental to Bonnie’s illness. I usually depended on the $5 from Bridgeport to meet current expenses. But at their annual meeting they decided to pay only twice a month, and I find it much harder to make $10 last two than to make $5 last a week. It looks like it should amount to the same thing, but in practice it doesn’t. Carolus is still without work, but is beginning to do a little business in the picture line. This, however, even at best will only keep him in a little spending money. He wasted too much when he did have a good job; and now he is minus a car, minus clothes and pretty nearly everything else that is necessary. We also miss the nominal sum of $2.00 a week that we charged him for board. Enclosed he is sending you a picture of Marguerite and one of himself and Marguerite in a more or less compromising position. They seem to be quite happy together and Marguerite doesn’t seem to mind that he is out of a job. Herman hasn’t seen his girl since she left for Toronto , but hears from her quite regularly. Marion and “Howy” meet two or three times a week and get to a show or somewhere. But I must close for this time. With love and all good wishes, I am 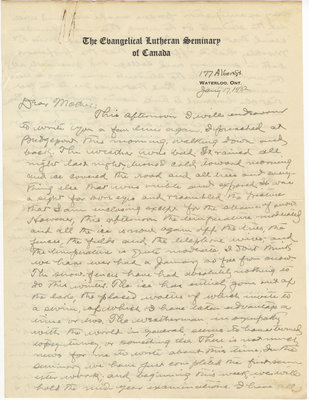