Media Type
Text
Item Type
Correspondence
Description
Typewritten partial letter, undated. This letter is a single page fragment that is unaddressed, unsigned and undated.
Notes
William Lyon Mackenzie King (1874-1950) was Canada's longest serving Prime Minister with a total of 22 years (1921-1930 and 1935-1948). King was born in Berlin, Ontario (present day Kitchener) on December 17, 1874. He graduated from the University of Toronto and went on to study economics at Harvard and Chicago University. In 1900 King was named Canada's first Deputy Minister of Labour, and became Minister of Labour in 1909. In 1921 King was elected Prime Minster of Canada. King was a member of the Liberal Party of Parliament for over 30 years, 22 of those years were spent as Prime Minister of Canada. William Lyon Mackenzie King died on July 22, 1950 in Kingsmere, Quebec.

That a citizen of Kitchener should have the effrontery to discuss a matter of civic interest without disclosing his identity appears to have made the tax collector quite indignant, as though the identity of a person has anything to do with matter under discussion. Mr. Alles should, as a civic servant, learn the first principles of common curtesy when discussing civic questions; and not brand a citizen "detestable" merely because said citizen prefers not to have his name receive headline newspaper publicity. The time may come when Mr. Alles would wish he too had remained anonymous.

Mr. Alles insists that the poll tax is compulsory under a provincial statute; then he proves the contrary by quoting the statute in question, which is merely an enabling act, and reads as follows: "Councils of cities, towns, villages and townships MAY pass by-laws for levying and collecting an annual tax to be known as a poll tax……." Mark you, it says “may” past by-laws. Not must, shall or should; but “may" if they so desire. If the collection of this poll tax were compulsory under the provincial statute there would be no need for a municipal by-law. The provincial act merely enables, or permits, a municipal council to enact such a by-law; and without such a by-law the tax could not be imposed and collected.

This law is in the same class as early-closing legislation. The provincial legislature passed an "enabling" act, and under authority granted by that act a municipal council MAY, after certain formalities have been complied with, pass an early-closing by-law.

From what has been said it will be seen that the poll tax is collected under a municipal by-law; not, as Mr. Alles contends, "under the Statute of Labor Act. 2 The council may crake the levy $1.00 or $l0.00, or wipe it out entirely if it so desires.

Mr. Alles says the amount collected in poll tax is about one third of a mill, and suggests there would be much more criticism if this amount were added to the property tax levy. Well, the amount in question is about equal to the annual increase in the administration costs of the assessment and tax collecting department during the past decade. This increase has taken place notwithstanding a great decrease in local improvements, and the fact that thousands of dollars were spent for equipment to facilitate the work in the department. Why the increase? It cannot be attributed to any great increase in population; nor can it rightly be said that errors now are fewer than they were formerly. Perhaps Mr. Alles would enlighten the: public on this matter. 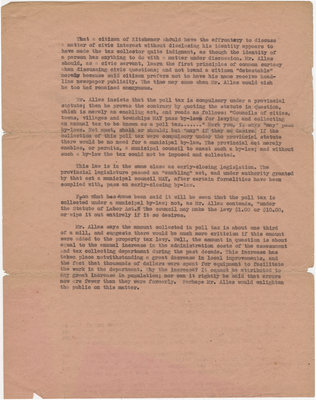