Creators
Robb, J. A., Recipient
Rowell, N. W.
, Author
Media Type
Text
Item Type
Correspondence
Description
Typewritten letter from N. W. Rowell, Liberal Party member and former MPP, to J. A. Robb, long-time Liberal politician and cabinet minister, on July 9, 1926. Rowell states how shocking the state of affairs in the Customs Department was and that King took no action.He also discusses the constitutional issue and his health issues.
Notes
William Lyon Mackenzie King (1874-1950) was Canada's longest serving Prime Minister with a total of 22 years (1921-1930 and 1935-1948). King was born in Berlin, Ontario (present day Kitchener) on December 17, 1874. He graduated from the University of Toronto and went on to study economics at Harvard and Chicago University. In 1900 King was named Canada's first Deputy Minister of Labour, and became Minister of Labour in 1909. In 1921 King was elected Prime Minster of Canada. King was a member of the Liberal Party of Parliament for over 30 years, 22 of those years were spent as Prime Minister of Canada. William Lyon Mackenzie King died on July 22, 1950 in Kingsmere, Quebec.

I have your letter of July 6th. May I state to you my view of the present situation quite frankly.

I think the Customs Investigation disclosed a shocking state of affairs in the Customs Department, and I take it that the Liberal members of the Customs Committee would not have agreed to the report which they did unless evidence justified all that the report contained. Having regard to the principle of cabinet solidarity, and the fact that many of the matters which came out before the Commission were drawn to: the attention of the Prime Minister some months before the Customs Committee met, and were not stopped, I cannot see how the Government can constitutionally or properly escape a measure of responsibility for the situation. I

recognize how anxious you and Mr. King and other members of the Government were to clean up the situation, but the fact is that it was not done. Nor do I think it is any real answer that preceding administrations may have permitted or winked at the abuses which were disclosed in the administration of the Customs in the last two or three years, or that if the Conservatives came into power they would not improve the situation. I do not see how we can get good Government in Canada unless the Electors punish not only the men who are guilty of offences, but impose political censure upon the Government under whose auspice the frauds were committed, no matter how innocent personally the members of the Government may be.

I further think that as the Government invited a vote on the Customs report by the Chairman moving the adoption of the report, they should not have asked dissolution before the vote. I think Parliament was entitled to pass upon the report of the Customs Committee. On the other hand, I do not think it was the proper function of Lord Byng to punish the Government by refusing dissolution, consequently compelling them to resign. I think that was a question for the country, and

I think if he had granted Mr. King’s request for dissolution, said the Government had gone to the country on the Customs issue, the Government would have been defeated.

I know Lord Byng well. I have the greatest respect and admiration for his integrity and character, and for his desire to do his duty, and only what he conceives to be his duty in the high position which he holds, and I am sure Lord Byng, in whatever he has done, has been actuated by no other motive than that of doing his duty.

Having stated that much on the one side, may I then express my view on the other. I think the relation of the representative of the Crown in Canada to the Government of Canada should be the same as that of his Majesty's to the Government in Great Britain, and that we should follow the British constitutional practice and usage. I, therefore, think if Mr. King pressed for dissolution he should have had it. Mr. Meighen has accepted the responsibility for Lord Byng’s refusal of a dissolution to Mr. King, as it was his duty to do, if,

under the circumstances, he accepted the task of forming a new Government. Having accepted the task he undoubtedly should have asked for an adjournment to constitute his Government and secure the election of its members. I think the manner in which he attempted to carry on, and his subsequent action in dissolving. the House in the manner in which it was dissolved, were contrary to all British constitutional practice and precedent, and I think your resolution was sound constitutionally, and the House did the right thing in supporting it and Mr. Meighen's shadow Government deserved the defeat it got.

Apart from all other considerations, for reasons of health, which I have explained to Mr. King, it is impossible for me to take an active part in the

campaign. I am going away for a somewhat prolonged rest on the insistence of my physician. I have, however, taken matters up here with Mr. Elliott, Mr. Atkinson and Mr. Gundy, and am doing what I can to assist in the Ontario situation. I think it is of the utmost importance that this campaign should not degenerate into an attack upon Lord Byng, and that extremists on constitutional questions, like Mr. Ewart and Mr.Bourassa, should not set the key note for the campaign. If they do it will alienate the sympathy of thousands of Liberals in this Province who are extremely anxious to see Mr. Meighen defeated, but are not prepared to countenance anything that would look like a movement towards separation or a personal attack upon Lord Byng. For you personally I would like to do anything I possibly can, and in view of your letter I will think the matter over carefully, and it may be that I can prepare a statement on the constitutional issue which I will send you in the form of a letter in answer to your request which you may be able to use. In other words, if I send you a statement on the constitutional issue you are at liberty 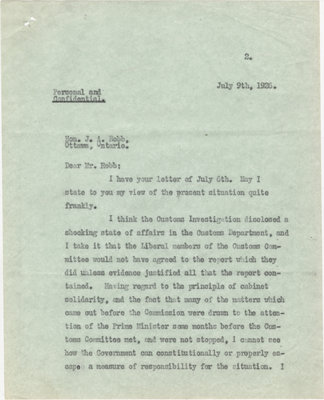