Creators
King, William Lyon Mackenzie, Recipient
Rowell, N. W.
, Author
Media Type
Text
Item Type
Correspondence
Description
Typewritten letter from N. W. Rowell, Liberal Party member and former MPP, to William Lyon Mackenzie King on July 9, 1926. Rowell explains that he cannot stand for election due to his health and an advisory from his physician. He indicated that a few of his colleagues are willing to assist with the political situation.
Notes
William Lyon Mackenzie King (1874-1950) was Canada's longest serving Prime Minister with a total of 22 years (1921-1930 and 1935-1948). King was born in Berlin, Ontario (present day Kitchener) on December 17, 1874. He graduated from the University of Toronto and went on to study economics at Harvard and Chicago University. In 1900 King was named Canada's first Deputy Minister of Labour, and became Minister of Labour in 1909. In 1921 King was elected Prime Minster of Canada. King was a member of the Liberal Party of Parliament for over 30 years, 22 of those years were spent as Prime Minister of Canada. William Lyon Mackenzie King died on July 22, 1950 in Kingsmere, Quebec.

I have carefully considered your letter of July 6th which Mr. Elliott handed to me. I appreciate fully the confidence you have expressed, but it will not be possible for me to contest a seat in the present election, or to take an active part in the campaign.

Apart from any other consideration I am restrained from doing it by my doctor's orders. For the past four months the doctor has told me I must get at least two months of complete rest, and to take it more or less easy for the greater part of a year, if I am to regain my full normal strength. He has permitted me to carry on for the past three or four months under very strict regulations, which I am afraid I have not always respected, on the understanding that I would take at least two months' vacation this summer, entirely free from responsibility of all kind. In fact he has ordered

me not to take away books involving serious reading.

I would not go into these details except to assure you that conditions absolutely preclude my doing what you ask. I do not like to talk about my own health, and, therefore, I hope you will treat this as entirely confidential. I told Mr. Elliott the conditions as he was urging me to take an active part in the campaign.

I agree with your view "that the relations of the Government to the King’s representative in Canada should be in all essentials the same as the relations of the Government to the Crown itself in the Old Land", and that all our Parliamentary proceedings should be governed by British constitutional practice. I hope that the discussion in the campaign can be kept on this sound principle. My fear is that the campaign will be taken advantage of by extremists who may say things about Lord Byng and about our relation to the Empire to which we cannot possibly give assent, and that these rash statements may lend color and give excuse for the campaign which will undoubtedly be waged by the Conservatives against the Liberals in this Province. I am sure we are going to face

another attempt to repeat the campaign of 1911. It will be a flag-waving campaign and the Liberals will be charged with attacking the representative of the Crow and desiring to secure a separation from the Empire. So far as Lord Byng is concerned I think he misapprehended his constitutional duties, but I do not for a moment think he had any other desire than to do what he conceived to be his duty, and that any attack upon him personally would, in my view, be not only entirely unjustified, but would severely re-act against the Liberal Party in this Province.

In my opinion the resolution which Mr.Robb moved in the House and upon which the Meighen shadow Government was defeated was a perfectly sound resolution, entirely justified by the facts. Mr.Meighen has accepted full responsibility or Lord Byng’s action in refusing you dissolution, and is undoubtedly responsible for all subsequent proceedings. The attack should be upon him and on his view of the constitution rather than on Lord Byng.

I am sure you must be greatly exhausted by the labours of the closing days of Parliament, and I hope

you will find your few days rest very beneficial.

Mr. Meighen since called upon to form an administration has made I think about as many mistakes as a man could in such a situation, and I cannot see how he can hope to carry the country.

I have discussed the political situation with Mr. Elliott, and have taken matters up with Mr. Gundy and Mr.Atkinson with a view of rendering such assistance as I could before I left for my holidays.

With kindest personal regards, I am, 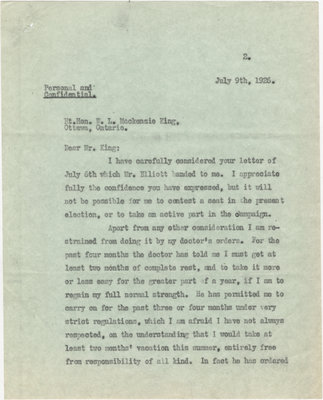