Transcribed by Danielle Hughes in 2017.

Leader of the Opposition}

Had circumstances permitted I would have come to Toronto tonight to see you personally with respect to the campaign with which the Party is now faced. It is one in which the Party must look to you for all the support possible, especially in view of all you have so zealously fought for by way of recognition of Canada's status as a self-governing nation on a basis of equality with that of the Mother Country itself.

I do not know anyone in Canada who can present the issue in its true light and in a light which will serve to strengthen the British Empire in all its self-governing communities, better than yourself. Personally, I hope you may find it possible to become a candidate in one of the constituencies; North Oxford is a constituency which comes first to my thoughts; next to North Oxford, North York. In either of these I believe you would be elected. You will recall one of the last conversations we had together in which I mentioned that when the campaign came on you might be needed. I believe you are greatly needed now, and in the event of your entering the field and of our being returned to power, I shall see that one or other of the alternatives we discussed is carried out.

I am well-nigh exhausted after the heavy strain of the entire session, and more particularly of the last few weeks. To get in shape for the campaign I shall have to take a few days rest. At the end of that time I shall hope to have a chance to discuss with you and other of our Toronto friends, the whole situation. 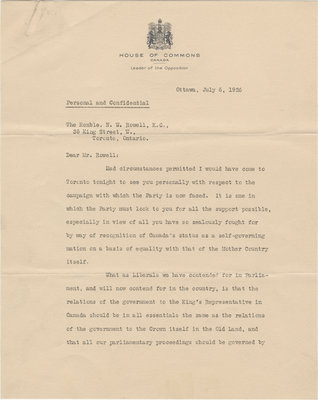