No communication could have been more welcome than your letter of January 11. I took the liberty of reading it aloud to the members of the Government, all of whom I found were quite prepared to go the length of taking in two or three members of the Progressive Party as Ministers, should the Progressive Party be prepared, as such, to share full responsibility with us for our legislative and administrative acts.

On Friday last, following the vote of a week ago last night, I sent for Mr. Forke and asked him to tell the members of his Party that the Government was prepared to discuss an arrangement of the kind with a representative committee of their number. This committee was named and met a committee of my colleagues and myself on Monday night last. With the exception of Mr. Forke all were opposed to a coalition.

They were not prepared to go further than to consider the working out of a legislative programme with respect to which they would undertake openly to co-operate in parliament. Negotiations looking to co-operation on a legislative programme have since continued and are still in progress. At the moment the outlook is distinctly hopeful as there is little in disagreement between us. The Speech from the Throne appears to have met with general approval in their ranks, as well as our own, and it will be on the basis of legislation there proposed that co-operation will be effected.

Personally I should have preferred coalition along the lines of the arrangement effected by Bruce with Page in Australia. This was what Dafoe also favoured most strongly, and with my whole-hearted approval he has quietly seen a number of Progressives in the hope of gaining their support for an arrangement of the kind. Having been confined to the house with a heavy cold during the past few days, I have not learned what his present view is, but from what I learn from other sources I gather that he has found that in their determination not to have any of their number enter the Cabinet as representatives of the Party, the majority of the Progressives are adamant.

With an exception or two there appears to be the best of feeling between most of the Progressives and ourselves. Such co-operative arrangement as it may be possible to work out will, I expect, be concluded before the vote takes place on the present amendment to the Address in reply to the Speech from the Throne. If the outcome is such as to gain for the Government the united support of the Progressive Party at that time, you may, I think, assume the arrangement come to will serve to enable the work of the present session to proceed in an orderly and substantial way. Working together for a few months may lead to a closer association at a later date. This, at least, is the view at present being expressed. 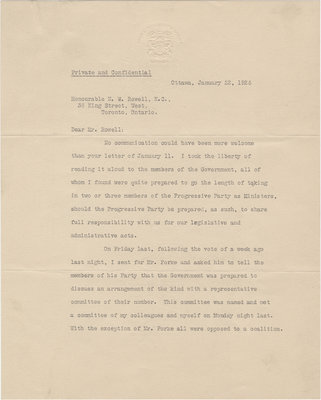