Transcribed by Danielle Hughes in 2017.

As directed by Mr.King,I beg to enclose copy of memorandum setting forth the arrangement made in regard to your house in Berlin.

Called on Mrs .Hoffman at 117 Queen Street North,Berlin, today,and after speaking with Minister over long distance phone arranged with her that Mr.King would engage her house from May 29th until June 29th at a rental of $50. House to remain as at present with all furnishings except a few things in the nature of wedding presents and souvenirs which Mrs.Hoffman wished to put away. Maid (Nellie Dingley) to be engaged at $3.00 per week from May 15 to May 29th and her board to be paid from the 15th until the time house occupied by Minister. The gardener to be paid 25 cents an hour for any work he may be engaged to do,such as cutting grass,etc. Any coal and wood used and gas to be paid for,as well as proportion of telephone charges.

If Minister wishes to have the house and servant for one or two weeks longer or a further period,this privilege to be accorded him at the same rate.

Wages to be paid to servant.

Rent and other charges to be paid to Mr.Laing,who has also authority to deal with other matters if necessary. 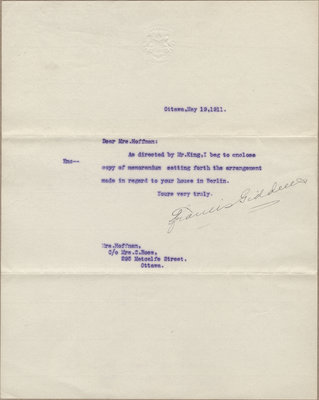