Our mutual friend, David Croll, is quoted in a morning paper as saying in a speech last night: "The Canadian people demand that negotiations continue with a view to settlement of the strike…..All that is needed is a little more patience."

I am wondering on what authority Dave made that assertion. The people with whom I come in contact, and whose sympathies are for the most part with labor, are beginning to wonder if the Government knows when patience ceases to be a virtue. The steel strike, as presently conducted, is not in the interest of the workers; but rather to save the face and show the power of a few labor leaders.

Some of us are beginning to wonder why such men as are leading the steel strike can, with impunity, flout the law, defy the Government and incite to insurrection, while minor offenders are fined or sent to jail.

In my humble opinion the time has come to end the strike by giving protection to the men who are obeying the law within the Stelco plant. The time for "patience" has ended; the time for courage is long overdue. Had the law been rigorously enforced with the first defiant speech of Millard and the first evidence of unlawful picketing at the plant the present situation would not have developed. Each evidence of Governmental weakness gave encouragement to the law violators in Hamilton not only, but also in Kitchener. If there is any further immunity granted the law violators at the expense of the law-abiding citizens within the Stelco plant I dread to contemplate the future of both labor and industry in Canada.

With kindest personal regards, I remain as ever, 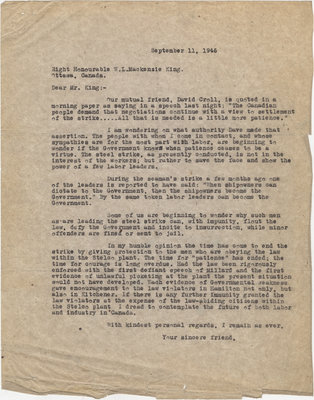