The statement by Ford strikers that, "The next move is up to the Government" brings prominently to the fore the question of whether the law of the jungle as exemplified by the Ford picket line, or the law of Canada is tp prevail in this country during the years that lie immediately ahead.

My sympathies are, and always have been with the workers in their legitimate efforts to obtain a better standard of living; but I am not in sympathy with illegal methods to achieve those ends. The present intollerable situation in Windsor is due largely to the encouragement given the law violators by Mayor Reaume and the Windsor City Council in protesting against sending police to maintain law and order. Within a few hours after the Windsor City Council has passed the resolution of protest, the same mayor and council had to call upon the strikers to remove a blockade of seized and stollen automobiles under threat of calling the militia. Further encouragement was given the law violators when Labor Minister Mitchell made the public statement that the last offer of these law violators to settle the strike was a fair one.

Any action by the Dominion Government that will give further encouragement to the lawless element within the labour movement will prove disastrous to industry and to the country as a whole. The union leaders in this city are waiting for governmental encouragement to pursue a course similar to that in Windsor; and I believe the same may be said of union leaders in most other cities and towns in Canada. The unions are not asking for better wages so much as for the right (?) to force every worker to join their organizations. One has only to consider what has taken place in Windsor to get a vision of the intollerable situation that would develop if all industries were completely unionized; and industry and workers alike were at the mercy of irresponsible and lawless leaders.

Much more might be said; but I do not wish to trespass upon your time. I might add, however, that I have expressed not only my own personal views upon the matter in question, but also the views of many other independent thinkers, among whom are union men who are not in sympathy with the more radical element among their leaders . 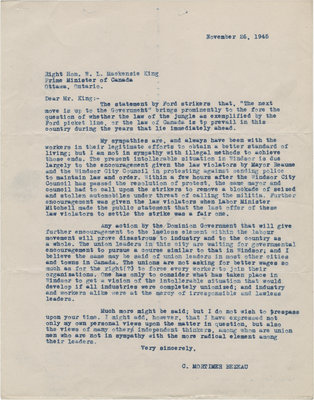