Signature in black ink by R. G. Robertson
Notes
William Lyon Mackenzie King (1874-1950) was Canada's longest serving Prime Minister with a total of 22 years (1921-1930 and 1935-1948). King was born in Berlin, Ontario (present day Kitchener) on December 17, 1874. He graduated from the University of Toronto and went on to study economics at Harvard and Chicago University. In 1900 King was named Canada's first Deputy Minister of Labour, and became Minister of Labour in 1909. In 1921 King was elected Prime Minster of Canada. King was a member of the Liberal Party of Parliament for over 30 years, 22 of those years were spent as Prime Minister of Canada. William Lyon Mackenzie King died on July 22, 1950 in Kingsmere, Quebec.

With reference to your letter to the Prime Minister of September 17th, which Mr. King acknowledged on September 18th, a report has now been received from the Department of National Defence in which it is explained that the decision on the question of the release of any officer or soldier from his duty overseas rests with the responsible officers overseas. The report also explains that it has been necessary in several instances to detail men for instructional duty with the Khaki College of Canada and with the various Divisional Educational establishments.

The Department is, however, having inquiries made as to the possibility of the early release of your son. As soon as any information is available, I shall be pleased to pass it on to you. 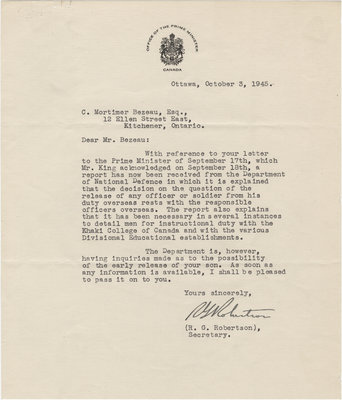