I thank you for your letter of February 6.

It is true that it was generally admitted that the C.C.F. preferred the election of the Liberal candidate to the Tory in Grey North. It is, however, quite apparent that on the day of election a very large percentage of C.C.F. members left their own party to vote for the Tories. You know enough about what happened in North Waterloo when I was defeated to be able to appreciate what took place in Grey North. There is no question in the world that similar methods were used in the last two days.

I shall of course, notwithstanding, be glad carefully to consider the representations of your letter re amendments to the Elections Act.

All good wishes to you. 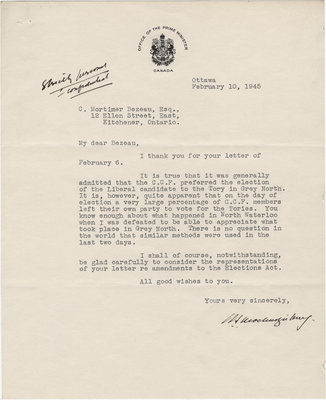