Needless for me to say how much I regret the result in Grey North; but the result of the vote brings several questions prominently to the fore, chief of which is the effect of third parties on popular, or representative government.

For the first sixty years of Confederation the Tories were in office two-thirds of the time with the aid of third parties, some of which were financed by Tories for the purpose of defeating the Liberals.

Among C. C. F. members it is generally admitted that they preferred election of the Liberal to the Tory in Grey North; but their candidate in the field caused the Tory to he elected though in a minority of almost two thousand votes. If the C. C. F. plays a similar roll in a general election they could bring about the defeat of your Government; and I am wondering if another session of Parliament would not be worth while if for no other purpose than to amend the Election Act so as to prevent a repetition, on a much larger scale, of what happened in Grey North. 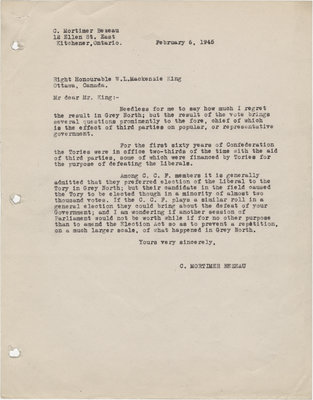