Creators
King, William Lyon Mackenzie, Recipient
Bezeau, C. Mortimer
, Author
Media Type
Text
Item Type
Correspondence
Description
Typewritten letter from C. Mortimer Bezeau to William Lyon Mackenzie King on May 26, 1938. Bezeau congratulates King on his speech in the House of Commons regarding foreign policy. Bezeau also expresses his fears about foreign markets.
Notes
William Lyon Mackenzie King (1874-1950) was Canada's longest serving Prime Minister with a total of 22 years (1921-1930 and 1935-1948). King was born in Berlin, Ontario (present day Kitchener) on December 17, 1874. He graduated from the University of Toronto and went on to study economics at Harvard and Chicago University. In 1900 King was named Canada's first Deputy Minister of Labour, and became Minister of Labour in 1909. In 1921 King was elected Prime Minster of Canada. King was a member of the Liberal Party of Parliament for over 30 years, 22 of those years were spent as Prime Minister of Canada. William Lyon Mackenzie King died on July 22, 1950 in Kingsmere, Quebec.

I have read with a great deal of interest your speech on foreign policy delivered in the House of Commons on Tuesday May 25, and the reply thereto by Right Honourable R.B.Bennett, as reported in the Globe and Mail.

I am in full accord with all that you said; and am particularly pleased with the suggestion "to carry through a reasonable and effective defense program of our own, and support any constructive program of conciliation and removal of economic barriers to peace."

The writer has often thought that the Imperial Trade Policy promoted by Mr. Bennett during the early days of his regime was largely responsible for prolonging the recent industrial depression and, if not also directly responsible, it was at least a factor in inducing nations outside the British Empire to seek markets in weaker countries by means such as were used by Italy in Ethiopia, and are now being used by Japan in China, and recently by Germany in Austria, and may yet be used by Germany in Czechoslovakia.

In a speech to the Twentieth Century Liberal Club of this city shortly after the Imperial Conference in Ottawa the writer predicted that if the Bennett Imperial Trade Policy continued in force for any great length of time the stronger nations outside the British Empire would seek markets by force of arms among the weaker nations; and when these were insufficient to meet the needs of the more powerful nations the same means would be tried by these countries to secure markets within the Empire itself. I regret that one-half of that prediction has come true; I pray the second half will ever remain unfulfilled.

I should be very glad to read the full text of your speech referred to if you would be good enough to send me a copy. 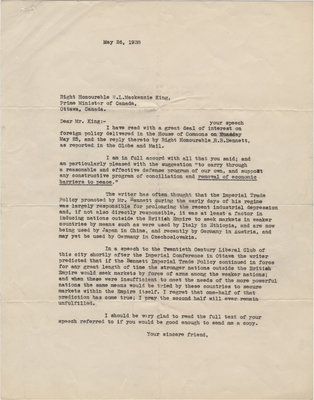