Additional words in pencil by C. Mortimer Bezeau
Notes
William Lyon Mackenzie King (1874-1950) was Canada's longest serving Prime Minister with a total of 22 years (1921-1930 and 1935-1948). King was born in Berlin, Ontario (present day Kitchener) on December 17, 1874. He graduated from the University of Toronto and went on to study economics at Harvard and Chicago University. In 1900 King was named Canada's first Deputy Minister of Labour, and became Minister of Labour in 1909. In 1921 King was elected Prime Minster of Canada. King was a member of the Liberal Party of Parliament for over 30 years, 22 of those years were spent as Prime Minister of Canada. William Lyon Mackenzie King died on July 22, 1950 in Kingsmere, Quebec.

Mrs. Bezeau and I listened with more pleasure than I can express to the splendid address broadcast by you last night. Your speech made a profound impression on the minds of all with whom I have since come in contact. Some pronounced it the greatest of the many great speeches you have delivered; and some declared its author to be the greatest statesman in the British Empire. It is my opinion that in the sentiments to which you have recently given expression you have laid the foundation of a movement which will ultimately resolve itself into a permanent world peace.

Mrs. Bezeau listened to you from her bed to which she has been confined for almost four months. Although deprivedof the power of speech she showed by the light in her face how much she appreciated all that you said. 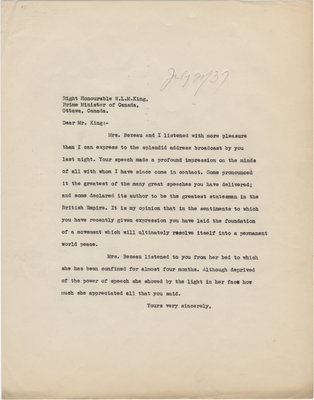