Creators
Henry, H. R. L., Author
Bezeau, C. Mortimer
, Recipient
Media Type
Text
Item Type
Correspondence
Description
Typewritten letter from H.R.L. Henry, King's Private Secretary, to C. Mortimer Bezeau on February 7, 1935. Henry thanks Bezeau for the correspondence and newspaper clippings. Henry states that King is very busy at this time, and it is not possible to pass the letter on to King.

Signature in black ink by H.R.L. Henry
Notes
Watermark on pages - Rolland Parchment / Made in Canada

C. Mortimer Bezeau (1871-1964) was a Canadian Liberal politician in the Kitchener, Ontario area. Bezeau was a member of the local government from 1925-1926 and 1928, and was mayor of Kitchener from 1931-1932. Bezeau made many contributions to the 'Letter to the Editor' portions of The Globe and Mail regarding various political matters and opinions. C. Mortimer Bezeau died in 1964 and is buried in Woodland Cemetery, Kitchener, Ontario.

I wish to acknowledge on Mr. Mackenzie King’s behalf your letter of February 4th. with which you have been so kind as to send a series of letters published in the “Kitchener Daily Record” a few months ago, and to let you know that it is not possible, owing to the pressing nature of Mr. King’s Parliamentary duties an engagements at this time, to bring communications of the kind to his attention. I am, however, retaining the fyle of correspondence in the hope that it may be possible to do so a little later on.

In the meantime I know that Mr. King would wish me to thank you very sincerely on his behalf for the kind thought which prompted you to bring the series of letters to his notice.

In accordance with your request I am attaching a

a copy of Hansard for January 21st. which contains Mr. King’s speech on the Address. 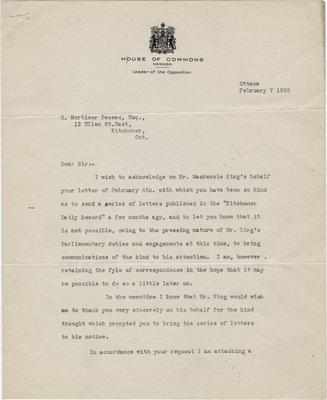