I am taking the liberty of handing you herewith a series of letters published in the Kithener Daily Record a few month ago.

You will recall that the subject of these letters received some consideration during one of my visits to Laurier House about three years ago; and at that time I agreed with you that the time was not yet ripe to make the views which I then held a matter of practical politics. Today the situation has changed; and I believe the time has come when only the most far-reaching proposals can save the Liberal Party; and these proposals must be enacted into practical legislation to save the country.

Not now to discuss the Prime Minister’s insincerity; nor the futility of his efforts to “blast” his way through the constitution to the accomplishment of his expressed purpose; but the question raised by Harry Anderson of THE GLOBE as to whether “The people are more concerned with past promises than with present performances” is worthy of some consideration. The fact is that the Prime Minister has made certain proposals which, to many, may look like performances; and these proposals, futile though they may be to accomplish any good purpose may, in a measure, stem the tide that was fast moving against the present government.

The proposals set forth in the letters herewith submitted for your consideration were pretty generally accepted as sound at the time they were published; although John Walter, writing over the pen name of J.RETLAW, offered some opposition to them; but this opposition was inspired by the fact that Walter hoped to be the C.C.F. candidate in the next election, and further thought that the writer might entertain similar aspirations with regard to the Liberal nomination.

In submitting these letters to you I do so from a sense of loyalty to yourself and to the party which you so ably lead, a loyalty that has increased with the passing years; and a desire to be of some little service in helping to solve the problems with which the Liberal Party is confronted.

I should be glad to have the file returned after you are through with the letters.

With kindest personal regards, and every good wish for your success in combating the most unscrupulous of politicians that has reigned in Ottawa during my time,

I should be glad to receive a Hansard report of any speech you may deliver on the Government’s Social Reform proposals. 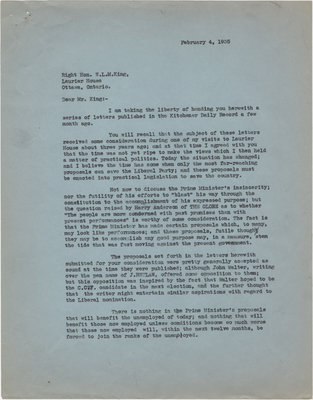