Creators
King, William Lyon Mackenzie, Author
Bezeau, C. Mortimer
, Recipient
Media Type
Text
Item Type
Correspondence
Description
Typewritten letter from William Lyon Mackenzie King to C. Mortimer Bezeau on October 22, 1930. King thanks Bezeau for the pears and the compliments given about his recent address in Parliament. King also tells Bezeau of the goings on in the government under the new Prime Minister and that he does not like being the 'opposition'.

Nothing could be more delicious that the pears which you sent to me some days ago, and which I have since been more than enjoying. The friends with whom I have shared a portion of your large basket have agreed with me that their quality could not be surpassed.

I wish very much that I could find it possible to grow something of the same kind at my little “farm” in the country at Kingsmere. I have done pretty well with raspberries, potatoes, asparagus, etc., but thus far have had but little success in pears. Let me thank you very warmly for the gift itself and for your never failing remembrance and friendship.

Let me thank you too for your kind words of reference to my small part in the recent special session. It was a most difficult task and a most unpleasant one. It was bad enough to be in opposition, when one felt that there was a

certain injustice in the verdict of July last, but it was even worse to see all that one had striven hardest to achieve being so largely destroyed at a single stroke. How difficult it is to create surpluses and how easy it is to create debt! How difficult it is to keep down the cost of living by lowering tariffs, and how easy to raise the cost of living by raising tariffs! It was cruel business to see the latter courses pursued at a session which had been thought of only as a political device in general campaign, and not even seriously entertained as a probability at the time it was suggested by the one who proposed it.

Nothing could be more farcical than the course pursued by Mr. Bennett in London. It would be wholly ludicrous, were it not that its effects upon political parties in Britain and upon all intra-imperial relations may have serious repercussion in more directions than one.

I am eagerly looking forward to again speaking in public on the political issues, but for obvious reasons have thought it wise to remain silent until the Imperial Conference is over. One thing at least Bennett has done for good and all is that he has served to make clear the difference between the so-called two old political parties.

Believe me, my dear Bezeau, 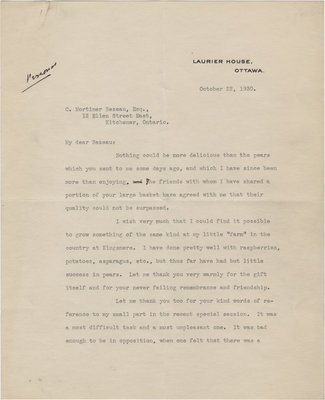