I must confess to being at a loss to know how to write at this time because of the bitterness that swells up in my heart against our opponents and their misrepresentations – a bitterness that is in conflict with my better judgement and my sympathy for the misguided electors. I may say, however, that the result of the election is no fault of yours. You fought a good fight in the interest of the people of Canada and of the empire. Though We Were not wholly successful at the polls there are a number of things for which we ought to be truly thankful, the greatest of which is the fact that you have been returned to parliament and will continue to lead the Liberal Party.

As I said before I find it Very difficult to reconcile myself to the new order, just as I did to the change in 1911, because of the misrepresentation through which the change has been brought about. I have been somewhat prepared for it though by what you said to me in a letter after that earlier defeat: “The task of gaining moral and intellectual liberty for the people has been the task of the ages, and will continue to be such through time. One must, therefore, be prepared for all the ignorance it may be responsible for, and strive the harder to bring enlightenment.”

Though defeat in fighting for a good cause is not a pleasant experience I feel, as I believe you do, that “It is better to lose in a cause which must ultimately win, than gain a temporary victory in a cause which must ultimately fail.” I do not believe that those who win by means that are foul get any real satisfactory from their victor. I doubt Bennett will make any material change in the existing tariff, because you “builded better that he could;” and in that lies the sting - a thorn in the flesh which he dare not remove.

I spent the last five weeks of the campaign in the Parry Sound, and Frontenac-Addington ridings. There, as never before, was I made to realize just how hard it is to contend against the forces of passion and viciousness.

I have often thought what a wonderful country this would be if all men would lay aside selfishness, and work for the common good. One has only to think of this with an open mind to visualize a Canada in which ALL the people would be happy and contented. Today, because of selfishness, “Truth is on the scaffold and wrong is on the throne;”and

because of this the people must suffer.

However, there is consolation in the thought that it cannot always be so. There is reason to believe that the power of evil is steadily being weakened; that more people are becoming enlightened and others less difficult to enlighten; and in the struggle between right and wrong, between justice and injustice, between righteousness and unrighteousness, when the baser of these triumph for the moment the victory is less pronounced than formerly, and the reign of wrong is of shorter duration.

To the enlightenment of the people you have made a splendid contribution; and my great hope is that you may long be spared to life and health; and as leader of the Liberal Party in Canada continue to lead us in the way of truth and righteousness in achieving the goal of what should be our national aspirations.

Mrs. Bezeau and all the members of my family join in paying tribute to you at this time. 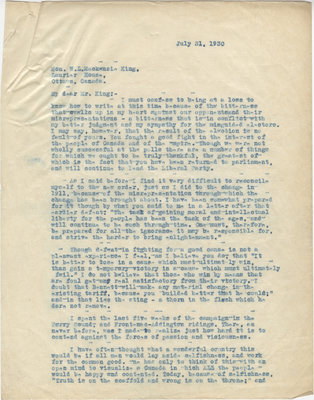