As you are no doubt aware, the Prime minister left on Friday for a holiday in Bermuda. Before leaving he handed me your letter of April 4th, in which you express approval of his statement in the House of Commons recently, on the unemployment situation.

Mr. King asked me to convey to you his warmest thanks for your kindly reference to the subject in question. He mentioned that it was heartening messages of the kind which lightened the burdens of those responsible for administering the affairs of the country in the best interests of the people.

President of the Privy Council 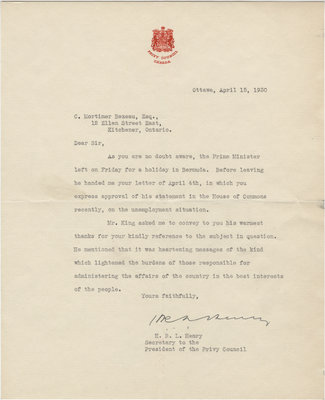